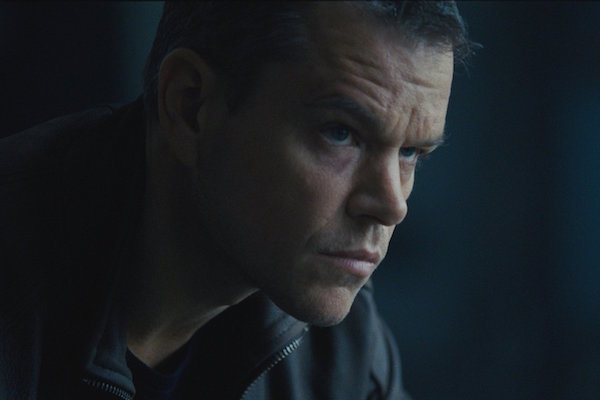 The Jason Bourne character and series have captured film audiences' imaginations and for good reason. Spectacular action sequences, superb editing, dazzling international locations, plus topical issues support a vulnerable, complex operative. Hunted by his own people, unsure of the complex threads of his identity, with a firm moral compass, Bourne struggles with his unique existential crisis.

The perfect casting of Matt Damon, soft hearted but hard bodied, brings the conflicted, confused Bourne to life. Beginning on the Greek/Albanian border in bare knuckle fighting, moving to Iceland, Athens, Syria, London, Berlin, and Silicon Valley, Jason is still hunted, resourceful, and aided by Nicky Parsons. The first words Bourne speaks in voiceover are, "I remember. I remember everything," as flashbacks from The Bourne Ultimatum remind us. But Bourne doesn't know his whole story. Details emerge as he confronts a ruthless CIA asset determined to "put him down" as Bourne navigates a violent Greek protest march, hacks black-op files, and of course, flees for his life throughout the film.

The good news is that the new chapter, simply called Jason Bourne, hits the right notes, employing the same basic formula and exactly the same music at key moments, notably the conclusion. Director and co-writer Paul Greengrass, who directed The Bourne Supremacy and The Bourne Ultimatum, knows his way around the franchise and its appeal. In a New York Times article, Greengrass accurately observes that he and co-writer Christopher Rouse had to offer the familiar but with new, relevant issues.

They found them through Deep Dream, a high-tech company with a new platform solving the threat to on-line privacy for its 1.5 billion users. However, covertly involved, the government wants a back door for surveillance of everyone's postings, and Snowden's name comes up as well. Dramatic irony--our knowing more than Bourne--intensifies the suspense but we race to keep up as well thanks to Rouse's breathtaking editing. Barry Ackroyd's cinematography is gorgeous, and the stunts phenomenal.