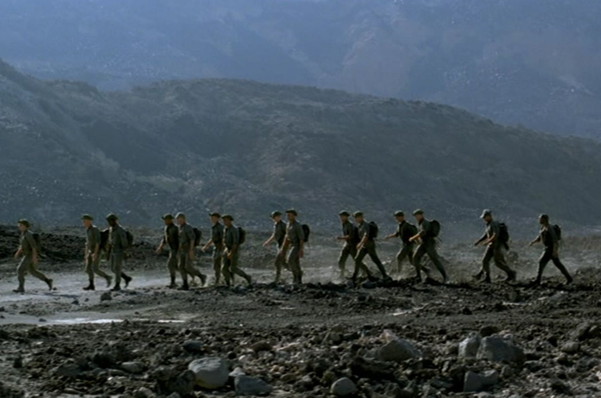 Inspired by Herman Melville’s “Billy Budd, Sailor,” French director Claire Denis’ “Beau travail” moves that apocryphal story from the vastness of the ocean to the desolate expanse of the desert bordering the Red Sea. Set in the East African country Djibouti at a French Foreign Legion outpost, Chief Master Sergeant Galoup narrates in flashback from Marseilles his self-destructive obsession with Gilles Sentain.

In the role of Melville’s alienated Claggart, Galoup describes something vague and menacing taking hold of him as soon as Sentain arrives on a plane from France. For his part, not the least bit ostentatious, Sentain melds into the group. He bolsters his colleagues’ admiration by courageously saving a legionnaire after a helicopter accident, shown only in its aftermath. Most of the scenes focus on the men’s exacting training drills, many of them balletic and beautiful to watch. Muscular, often shirtless bodies move in harmonious motion, pulling themselves over barriers, scooting under barbed wire, springing into and out of a circle formation, stretching and lying flat on the ground, one knee bent under, with enviable ease, while at times chanting during these bonding exercises.

The commandant observes but cares little, and Sentain’s immediate supervisor Forestier is all business. By contrast, local women factor in marginally as they pursue their ordinary lives in the market, at a dance hall, or just observing. Through it all, submerged tension dominates and builds imperceptibly but inevitably to a catastrophic event.

Preferring long takes with some mesmerizing tracking shots, cinematographer Agnès Godard captures all this in gorgeous compositions that co-writer/director Denis often presents without dialogue, eloquent exchanges of glances sufficient to communicate resentment or approval. At times, haunting music pulses and pounds, with selections from Benjamin Britten’s opera “Billy Budd” as well as a Neil Young and Crazy Horse song plus East African music.

None of this would work were the actors not impassive fonts of suppressed individuality so necessary in the military. Moreover, as Sentain, Grégoire Colin projects the understated composure essential to convincingly communicate his appeal. As Galoup, Denis Lavant is sinister.

No spoilers, but sandwiched into the closing credits is an astonishing concluding scene, breathtaking in its image and searing in its symbolic expression. Primarily in French, with some Italian and Russian, all with English subtitles, a superb 4K restoration of the 1999 “Beau Travail” is available through multiple, virtual cinemas, including Amazon Prime.  Check listings.