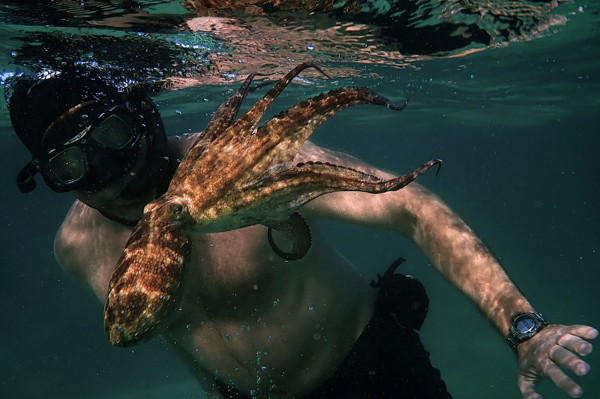 The lovely, surprising documentary “My Octopus Teacher” features, as the film title accurately states, a wild octopus that educates the central character, Craig Foster. He becomes enlightened and enriched regarding the multiple ways a partnership with nature, this one octopus in particular, benefits an individual. As astonishing as it is heartwarming, Foster generously shares an incredible journey.

The only person on camera until the very end of the film, Foster speaks in interviews in his home and in voiceover narration as directors Pippa Ehrlich and James Reed follow Craig through one significant year. Every day, free diving without a wetsuit, Foster enters the frigid water in False Bay, a remote inlet on South Africa’s Cape Peninsula. Amidst the diverse sea life in a gorgeous kelp forest, Foster casually encounters and then repeatedly returns to watch a mature wild octopus.

Nature being nature, dangers abound, especially in the form of pyjama sharks, also known as striped catsharks, that stalk the octopus. It is quite amazing to watch the octopus invent defenses, even in a species known for its intelligence. But even more unexpected than the dazzling store of strategies (just one being covering herself in available shells) is the curiosity that Foster elicits and the truly marvelous, mind-boggling friendship between the octopus and Foster—and I do mean that they bond. Completely nonaggressive, Foster dives every day, soon learning where the octopus hunts and hides, and she responds.

As spellbinding, the cinematography is among the best of nature photography with years devoted to the making of this film. As praiseworthy, in nicely edited, unintrusive interviews spaced throughout the film, Foster expresses his need “to have a radical change in my life, and the only way I knew to do it was to be in this ocean with her.” As he learns from the octopus, Foster gains perspective on his own vulnerability, his family and his son. As he reports, his relationship with humans was changing as he awakens to the beauty, the charm, and the mystery of the natural world. There are, of course, tragic moments, but this documentary offers the much needed, uplifting reminder of, as Foster says, our being part of this world not just a visitor. It is as thrilling as it is beautiful and is among the best documentaries of the year. “My Octopus Teacher” is available now on Netflix.