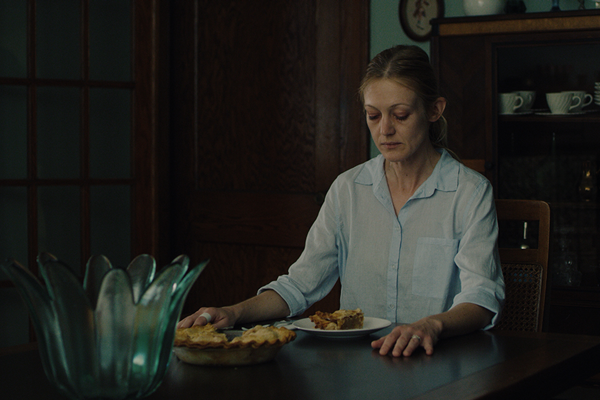 ‘The Swerve’ dives deep into a woman’s psychological struggle

In his 1854 “Walden,” Henry David Thoreau wrote of lives of quiet desperation. A modern day example dominates the psychological drama “The Swerve,” in the person of high-school English teacher Holly. Her philandering husband, her alcoholic sister, her two insolent teenage boys, and her indifferent students combine to undermine her fragile hold on emotional stability.

Add to that mountain of daily distress the late evening swerve of the title, and Holly’s world crumbles incident by incident. Tense and drawn, her chin jutting, her stringy hair pulled back to increase the severity of her look, Holly is on the fringe of mental collapse. Erratic and illogical, Holly doesn’t have far to fall from the first scene when a mouse in her kitchen catapults her to a frenzy through to many other unnerving events. No one reaches out to help, and she remains defiantly resistant to, and largely isolated from, any restorative kindness or help.

In his feature film debut, writer/director Dean Kapsalis provides a nerve-wracking ride, though some scenes feel distracting and contrived rather than organic. More on Holly’s emotional deterioration and less on the sexual acting out by Holly and husband Rob would have enriched the pervasive insensitivity to and lack of appreciation of women who labor day after day without recognition of the toll it takes. The more sensational aspects of Holly’s unraveling distract from a more pervasive and insidious callousness. On the edge with her immediate family and her relatives, the indifference and inability to nurture her in any way is all too familiar, perhaps so pervasive it too often remains unacknowledged.

In another register, because at least one scene clearly involves her imagining people not there and because Holly’s perspective informs every moment of the film, a question lingers as to how much of this is real and how much may be Holly’s invention, adding complexity and viewer involvement. As Holly, Azura Skye commands the screen with a psychological intensity as rare as it is compelling. It is her performance that transforms this all-but invisible woman into a memorable, haunting presence. The cinematography translates her emotions into a subdued palette, and the music complements the undercurrents of pain and panic as Holly’s meltdown progresses in this captivating film. “The Swerve” is available on several platforms.