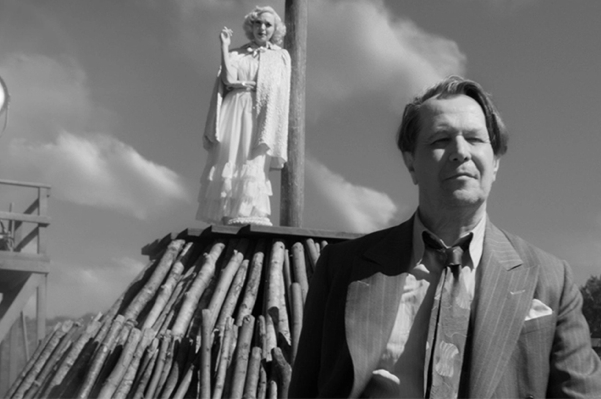 Herman Mankiewicz, called Mank, is an irredeemable alcoholic with a genius for writing screenplays. Opening titles announce the Hollywood arrival of virtuoso Orson Welles enjoying carte blanche for his first film. It’s 1940 with Welles’ friend and scriptwriter Mank sequestered with an assistant and a secretary in Victorville, hypothetically a safe distance from L.A.’s booze and distractions. Nevertheless, in flashbacks to the 30s and occasionally at this desert retreat, studio icons appear: Louis B. Mayer, Irving Thalberg, producer John Houseman, Mank’s brother Joe, and co-writers Ben Hecht, Charles Lederer, George S. Kaufman, and more, all minimally beyond caricature.

Yet here I must include personal experiences. I’ve taught “Citizen Kane” at least twenty times and researched it extensively. I’ve had the privilege of talking in person with “Kane’s” producer John Houseman. Without question, Welles revised Mank’s script, for which they shared an Oscar, the only one of nine nominations. Most relevant, Welles called his “Citizen Kane” Rosebud hook “dime-store Freud” and the same applies to the late Jack Fincher’s screenplay, director David’s father. And so in the tradition for the amazing “Citizen Kane,” this one will spark new disagreements and keep the tradition going. “Mank” streams on Netflix.