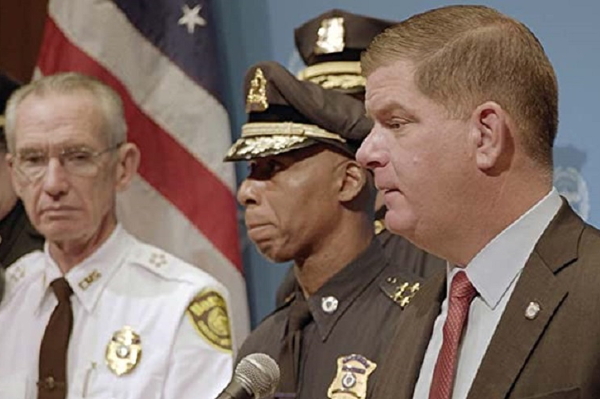 ‘City Hall’ goes behind the scenes of Boston’s government

Documentarian Frederick Wiseman does not make the viewer’s life easy. Quite intentionally he provides no voiceover narration and abhors flashy edits. Moreover, his latest film, “City Hall,” runs four and a half hours. What he does do, and has for over five decades, is burrow deeply into the institution or experience he’s detailing.

By contrast, conventional documentaries come across as delivering prejudged, predigested information. Yes, Wiseman edits and organizes the flow, but he also provides so much information that he grants extraordinary access to his subjects. Further, as his titles indicate, Wiseman chooses institutions rather than individuals as he did in “High School,” “Basic Training,” “Juvenile Court,” and “National Gallery,” to name a few. Now, in “City Hall” he trains his penetrating lens on Boston’s bureaucracies: administrators, police, firefighters, sanitation, inspectors, traffic control, community outreach, local resident groups, race relations, and more.

At length, at times perhaps to our dismay, viewers take a seat in Boston budget hearings, in the room of an answering call center, at marriages, parade announcements, parking arrangements and safety precautions for the Red Sox celebration. Add to that task forces on eviction notices, Mayor Martin J. Walsh’s interaction with numerous local groups (senior citizens, Latinx, nurses, etc.), construction permits and school oversight, garbage pickup, civil rights, and master plans; in effect, the myriad of areas a city oversees, sanctions, and negotiates—a jigsaw puzzle of successes, challenges, and setbacks. Responding to all that, Boston Mayor Walsh’s closing speech is downright inspirational.

Scenes unfold in real time, no interpretive processing to create forced drama technically or thematically. What accumulates is a breadth and depth of understanding, both pedestrian and prosaic, of a huge city government, Boston’s, in all its complicated, complex, humdrum and contested spheres. Occasional shots of city streets and buildings provide breathing space, needed breaks in this marathon. Wiseman says he made “City Hall” to, in his words, “illustrate why government is necessary for people to successfully live together” in a city “whose population exemplifies the history of diversity of America. . . The Boston city government is designed and strives to offer these services in a manner consistent with the Constitution and democratic norms.” “City Hall” offers a comprehensive seminar in civics and is available on the Zipporah Films website.