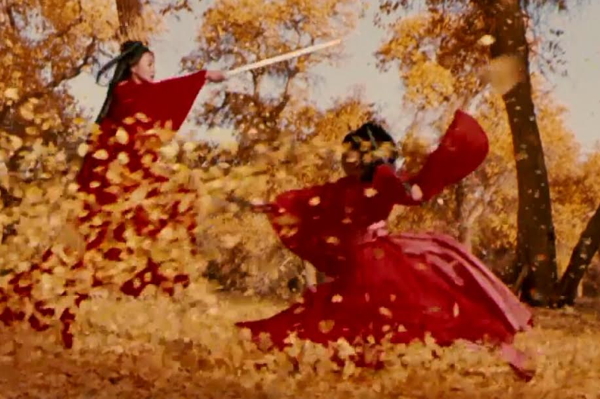 With “Crouching Tiger, Hidden Dragon,” director Ang Lee took stylized martial arts fighting out of the semi-realistic arena and into the balletic sphere. Many since then have adapted, even advanced, aerial battles and slow motion skirmishes. But it is mainland Chinese director Zhang Yimou, a filmmaker and a poet, who has taken the wuxia style to another level in “Hero.”

Set in the early Warring States period in the Kingdom of Qin, the anchor is Nameless, a resourceful warrior. He has come to an audience with the King to claim his rightful and bountiful reward for killing the three most feared, infamous assassins, among hundreds, in the seven kingdoms that the King ruthlessly battles to unite under his rule. Though it took Nameless ten years, he defeated Sky, Broken Sword, and Snow by studying their strengths, which reveals their weaknesses. Nameless knows, for example, that for Sky, music and martial arts are the same. For Broken Sword, his superb calligraphy reveals the subtle, elusive weakness in his sword play. And for Snow, her emotional connection to Broken Sword dooms her.
As Nameless physically approaches the King closer with each narrative, his triumphs are revealed in flashbacks. But the stories will be altered, told and retold from different perspectives with clever twists. Most arresting, however, is the visual style, a whirling blend of music and movement or lyrical, slow-motion action that holds the viewer in rapturous awe. Each scene explores and, at times, explodes with evocative color—red defining one scene, a vortex of swirling yellow leaves another, or the blue of water and distant hills.

The fluid motion of armies, of thousands of arrows, of protective guards, or of the pairs of combatants propel the action. “Hero” is a gorgeous, spellbinding visual experience. In Mandarin with English subtitles. Sponsored by Webster University’s film series and Confucius Institute, Dr. Belinda He, postdoctoral fellow of cinema at UC Berkeley, will lead a discussion of “Hero” Monday, February 15, from 6:00 to 7:00 p.m. You may find more information and a link to register at the Webster University film series website.