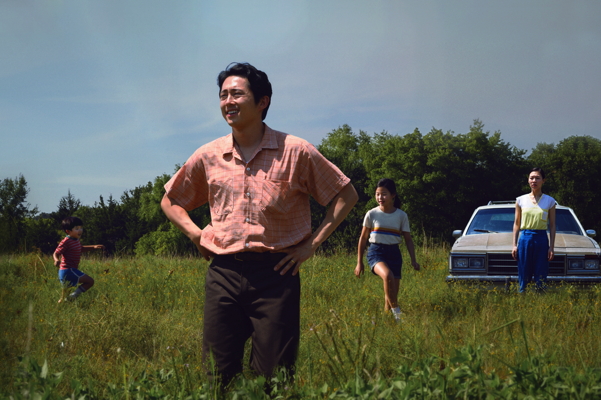 Some rare films offer insight into the human spirit, family dynamics, and tenacious determination. “Minari” achieves that and more in writer/director Lee Isaac Chung’s stirring tribute to the Yi family, their triumphs and trials. Pursuing his dream of a better life for his immigrant family, Jacob uproots wife Monica, seven-year-old son David, and older daughter Anne.

Moving from Los Angeles to an Arkansas farm, Jacob and Monica get jobs at a poultry plant sexing chickens, discarding the baby males since they don’t taste as good and can’t lay eggs. Jacob advises David, “We should try to be useful.” And he does, deciding that, with 30,000 Koreans immigrating to the U.S. yearly, a market exists for Korean vegetables, which he’ll plant and sell.

Numerous issues confront the Yis. David has a heart condition, which worries Monica with their farm an hour from a hospital. Natural elements make farming difficult: the need for sufficient water, record heat, ferocious storms, fear of tornadoes, and intermittent electricity. The community also factors in: the local church, a Korean veteran who casts out evil spirits and carries a cross down the road on Sundays, young friends curious about Koreans, and Grandma Soonja. Of her, David says, “She’s not a real grandma because they bake cookies, don’t swear, or wear men’s underwear.” Their developing relationship is one of the rewarding gems in a film with many treasures.

The title “Minari” comes courtesy of Grandma Soonja who brings the minari plant with her from South Korea when she joins her daughter’s family. This Korean watercress thrives even when transplanted, a symbolism never pushed but certainly poignant. Similarly, life unfolds in Chung’s autobiographical film with an authentic, rich directness, neither sentimental nor melodramatic. Magnificent performances enhance the impact, especially Steven Yeun as Jacob and Yuh-jung Youn as Soonja.

Among the best films of this year and of family life, winner of the U.S. Dramatic Grand Jury Prize and an audience award at last year’s Sundance Festival, nominated this year for numerous awards, including a Golden Globe, in English and primarily Korean with English subtitles, “Minari” screens at Landmark’s Plaza Frontenac Ciname and the Hi-Pointe Cinema. It is also available for virtual viewing through the Cinema St. Louis website and the A24 website.