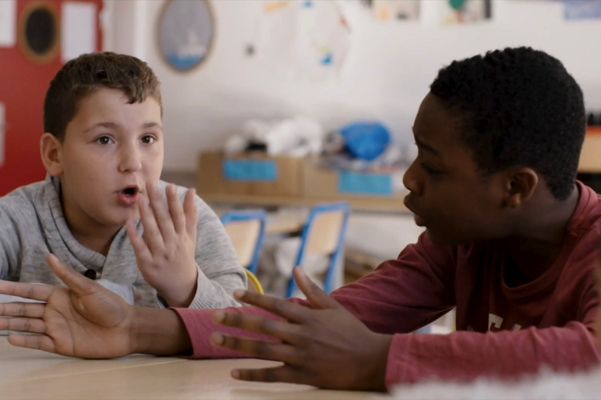 To be fair, a few interesting exchanges do occur between students, but they have no payoff. Each just ends. For example, David, a white student, admirably criticizes Marine Le Pen’s racism, saying, “It’s like she’s buried in this darkness that prevents her from seeing good things.” But he and his black classmate Guy-Yanis, whose parents immigrated from the Ivory Coast, debate the meaning of origins and the importance of parents’ birthplace, repeating their ideas without any development.

In another brief scene, there’s an inconsequential effort at sociological observation. David says, “It would be awful if everyone behaved well. . . If there weren’t people on the dark side, what would become of humanity? People would just go to work.” End of consideration. Later, calmly, students object to the stereotyping of zip code 93, what they call the hood, arguing for taking each person on their own merits. But, as usual, no elaboration follows, with no apparent connection to preceding or subsequent scenes, a fault of editing.

A couple of excursions add little insight: a trip to the shore, a drive to a drum lesson past refugee tents very casually brings up their plight, one student films pigeons, another shoots a rusty old building that’s going to be demolished, and, late in the film, David visits his grandmother in Romania. To describe all of these episodes as superficial is a compliment.

Technically, shots of the area punctuate interviews with dizzying, headache-inducing, handheld camera movement. The editing is equally amateurish throughout. This was probably an excellent class assignment, but in the opening, one student comments that a film should draw you in or what’s the point? Exactly. I’m left wondering. “Un Film Dramatique” is available on the Cinema Guild website and through a direct on the Webster University Film Series website.