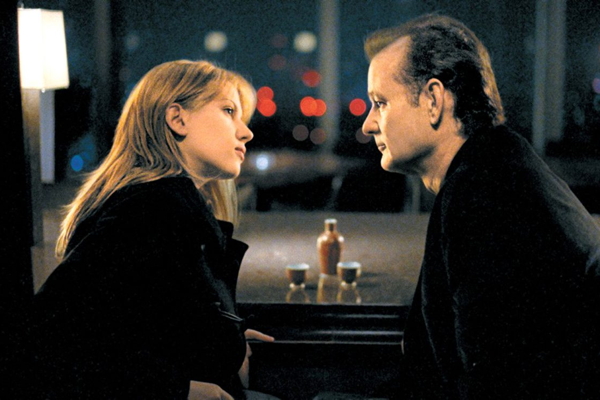 Each Thursday in March, Webster University is presenting a discussion of four Sofia Coppola’s films. For each week’s selection, a different Coppola expert will make a brief presentation followed by a question-and-answer discussion. Participants are asked to watch each film on their own before the sessions. The series kicks off March 4 with her remarkable 2003 “Lost in Translation.”

The synopsis for writer/director/producer Coppola’s “Lost in Translation” doesn’t begin to describe the maturity and fascination of this, only her second film. It goes as follows: fading, perhaps even faded, American movie star Bob Harris (Bill Murray) arrives in Tokyo for production of an alcohol ad for Santori whiskey. He moves into the Tokyo Hyatt also housing Charlotte (Scarlett Johansson), there because her workaholic husband (Giovanni Ribisi) has a photography job that keeps him busy trailing the band he’s shooting. Harris and Charlotte connect through their shared insomnia, dislocation, and, above all, yearning for an intimacy Charlotte isn’t finding in her new marriage and Harris doesn’t enjoy in his long-term one.

“Lost in Translation” exquisitely probes the delicacy of attraction and the deeply moving effect of restraint. Murray, in particular, is a revelation in a nuanced performance that deserves all the praise received to date. Fabulous comedians like Murray seldom get the chance to showcase the dramatic expertise they possess. He communicates volumes with a glance, a barely perceptive wry half-smile, a half-second’s pause before a line. “Lost in Translation” is, quite simply, a brilliant film that unfolds like the lotus flower celebrated in its setting of Japan.

The understated but intense emotional pain and longing makes “Lost in Translation” one of the most poignant and erotic, but never sexual, films. The word ravishing has been used by several critics, and it is appropriate. Moreover, Lance Acord’s cinematography presents Tokyo in a fresh, lovely but also heartbreaking visualization. Having visited many of these locations, I’m in awe of Coppola and Acord’s ability to show Tokyo as a perfect expression of the complex emotional register experienced there. Moreover, Coppola’s writing finds perfection in Bill Murray’s and Scarlett Johansson’s embodiment of her characters. Coppola shows a wisdom, a confidence, and a talent well beyond her years.

Dr. Daniel Yezbick, Professor of Media Studies and Intercultural/International Education Coordinator at St. Louis Community College-Wildwood, will present his ideas on “Lost in Translation” and lead the discussion on March 4. The session begins at 7:00 p.m. and registration is available on the Webster University Film Series website.