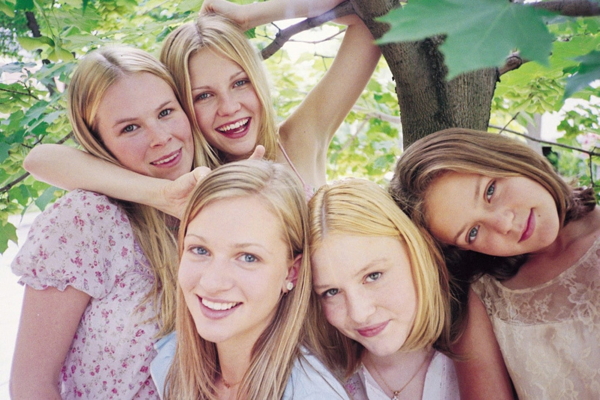 Each Thursday in March, Webster University is presenting a discussion of a Sofia Coppola film. Each week, a different Coppola expert will make a brief presentation followed by a question-and-answer discussion. Those interested are asked to watch each film on their own before the sessions. The series continues March 11 with Coppola’s mature, 1999 feature debut “The Virgin Suicides.”

Adapting Jeffrey Eugenides’ 1993 novel, Coppola tells the story of the five teenage Lisbon sisters’ suicides from the vantage of a male narrator’s twenty-five year hindsight. It’s no spoiler to note the self-inflicted deaths, identified by the title as well as voiceover in early scenes. The question is not what but why? That answer emerges indirectly in a brightly lit, colorful film that belies its tragic subject.

Characteristically, Coppola applies a gentle, restrained touch in presenting the teenagers’ lives in a 1970s Grosse Pointe, Michigan  suburban world. The colliding elements include overly restrictive parents, the girls’ emerging sexuality, and their irresistible sexual attraction for the teenage boys who idealize and ogle them. The sisters range in age from thirteen to seventeen, but it is Lux who dominates the story and with whom the central narrator Tripp Fontaine (great name), Lux’s newly matured, ulta-cool school mate, became completely enamored at first sight. Their intense emotional longing and their overpowering desire will become the catalyst for what follows as Coppola delicately probes the fatal attraction.

The acting contributes to the powerful impact: James Woods as the clueless math teacher father, Kathleen Turner (ironically) as the repressive mother, Josh Hartnett as Trip, and Kirsten Dunst as Lux. Photographed with gorgeous backlight, all five Lisbon daughters beckon. Coppola exhibits a wisdom and a confidence well beyond her years. Given the recent rise in teenage suicides, this 1999 film is still terrifyingly relevant.

Adjunct Professor of English at Webster University Taylor Gruenloh will present his ideas on “The Virgin Suicides” and lead the March 11th discussion. The session begins at 7:00 p.m. and registration is available on Webster University Film Series website.