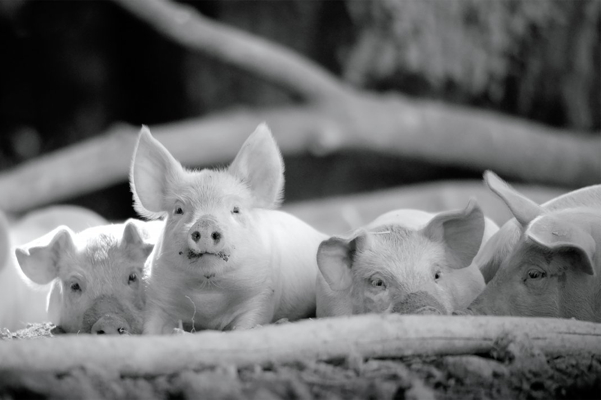 Russian director Victor Kossakovsky, who creates unique documentaries, writes that “the essence of cinema is showing, not telling.” That is exactly what he does. He includes no narration, no explanation, no onscreen titles, and no background music. To describe his work as minimalist exaggerates  the bare bones presentation. And yet, I find his works engrossing for his observational skill.

Kossakovsky previous work, “Aquarela,” captures water in its beauty, fury, and danger. His current Norwegian-American co-production “Gunda” watches a mother sow with a dozen piglets; a few chickens, one of them one-legged and managing nicely; and a herd of mature cows. The camera frames and follows these animals at their level, never condescending to them from a superior position. That would be antithetical to the film’s intent, which asks us, quoting Kossakovsky, to “slow down and experience life as his subjects do, taking in their world with a magical patience” (press notes.)

“Gunda” does require inquisitive curiosity as Kossakovsky encourages viewers to, again in his words, “meditate on the mystery of animal consciousness, and reckon with the role humanity plays in it.” And what a joy it truly is to leave our usual, self-absorbed perspective behind, to surrender to the ebb and flow of life as these species experience it, to enjoy the humor, feel wonder and delightful surrender to this unique world. Shooting on Norwegian farms, Kossakovsky found and cast Gunda when location scouting for the project. Devoting half of the film to her, the star he calls his Meryl Streep, Kossakovsky chose a sow because of his childhood affection and interaction with a special piglet named Vasya, plus he did not want to foreground cute animals. All deserve respect and, as Victor writes, his message is that “We can do better.”

The choice of black and white cinematography complements the unembellished approach by avoiding any distracting color. Aiming to foster respect through their representation, Gunda as well as all the other animals speak with their profound presence, if we just give them this chance.

Director Paul Thomas Anderson calls “Gunda” pure cinema, and it is as unique as it is welcome. “Gunda” is showing at Landmark’s Plaza Frontenac cinema.