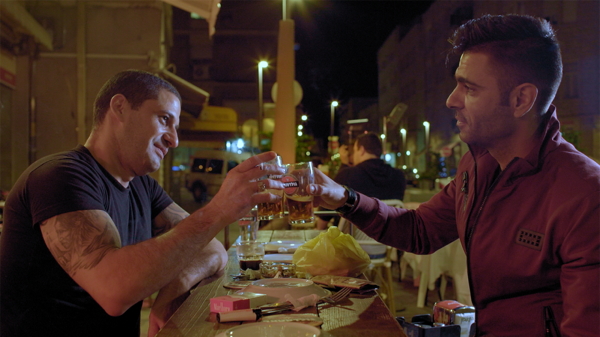 The 26th Jewish Film Festival offers thirteen films, both documentaries and scripted narratives, for on-demand virtual screenings June 6 through June 13. Several programs include conversations and interviews with directors and film experts, a rewarding extra. The four films I previewed offer an ideal diversity of subject matter and styles.

First, so dangerous to watch if you’re hungry, the documentary “Breaking Bread” is a mouth-watering trip through Arab and Israeli cuisine with a handful of local chef guides. From Haifa to Jaffa, Akko to Tel Aviv and more, food is, as this film proves, a bridge between ethnicities, religions, and languages, as they assert. In fact, the Haifa Food Festival pairs Arabs and Israelis. A few maps, some archival footage, and music add context for a lovely blend of friendships and food.

Another documentary, “Love It Was Not,” merits praise for its powerful story, that of Helena Citron, sent to Auschwitz in 1942. There SS officer Franz Wunsch fell in love with her singing and then her, protecting Helena until the end of the war. In 1972, then living in Tel Aviv, Helena is asked to testify at his trial. Truly astonishing events are communicated through animation, archival material, and amazing interview footage with Helena, Franz, members of their families, and concentration camp survivors in this superb film.

Yet another nonfiction work, “Antisemitism,” documents the French history of exactly that, back to medieval times and up to the catalyst for the film, the 2018 murder of 85-year-old Mireille Knoll, a Holocaust survivor. Through a few reenactments, archival material, and a wealth of interviews with historians, sociologists, psychiatrist, rabbis, and more, “Antisemitism” chronicles Wilhelm Marr’s coining of the term, Édouard Drumont founding the Antisemitic League of France in1889, Holocaust denial, Théodore Herzl launching the idea of a Jewish State, and more in this informative analysis.

Less sophisticated but well-intentioned, based on a true story, “Service to Man” follows Eli Rosenberg’s struggle as a Jewish student at the historically Black Meharry medical school in Tennessee. There are many more selections to choose from, and all have English subtitles as needed. You may get more information about this year’s Jewish Film Festival at 314-442-3190 or at stljewishfilmfestival.org.