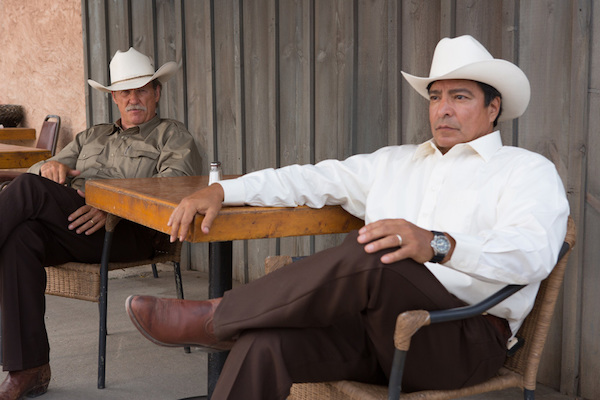 Two pairs of men on opposite sides of the law exhibit a fixation on their goals that sets them on a collision course. Brothers Toby and Tanner Howard resolve to save the family farm for which a West Texas bank has hoodwinked their now deceased mother into negotiating a reverse mortgage. Their plan: rob banks, small ones, dead easy takings.

Their adversaries, Texas Ranger Marcus and his Native American/Mexican deputy Alberto are equally determined to stop them, tooling around dusty, small towns that the Howard brothers' target. It's that simple and it's brilliant. Credit for this magnificent tour de force goes to Taylor Sheridan's screenplay that wastes no time or energy on trivial matters. Every exchange comes with the feel of real life captured like lightning in a bottle. And all the actors--those in central or supporting roles--sink their teeth into the nuances, bringing vitality to every interaction.

Anchoring the cast is Jeff Bridges as Marcus, a lawman who has seen and experienced the depth and breadth of human foibles. His deputy Alberto, a flawless Gil Birmingham, responds to a string of insulting jabs about Mexicans and Indians, though it's clear Marcus values him. As the hot-headed brother Tanner, who's spent ten of his 39 years in jail, Ben Foster spirals out of control. As Toby, Chris Pine articulates the more thoughtful approach to this robbery business. He's done three tours in Iraq but, as he says, "There's no bailout for people like us." Dale Dickey delivers a fine performance as Toby's ex-wife Elsie, appropriately exhausted with coping. Graffiti on walls, signs on roadsides, a stop at a casino--Hell or High Water repeatedly connects with today's inequitable world.

Director David Mackenzie and cinematographer Giles Nuttgens shot with Albuquerque and Clovis, New Mexico standing in for Texas. This month's American Cinematographer describes their decision to establish the brothers with energetic camera work and fast-paced editing contrasted with the lawmen's more sedate scenes. Nuttgens slightly overexposed images to communicate the heat and cadaverous farms that prompted desperate actions. Nick Cave's music is evocative, and watch for the great, short scene at the T-Bone Cafe that will become every bit as iconic as the one in Five Easy Pieces. Hell or High Water hits a very high water mark for filmmaking. It's already among the best films of the year. At several cinemas; check local listings.