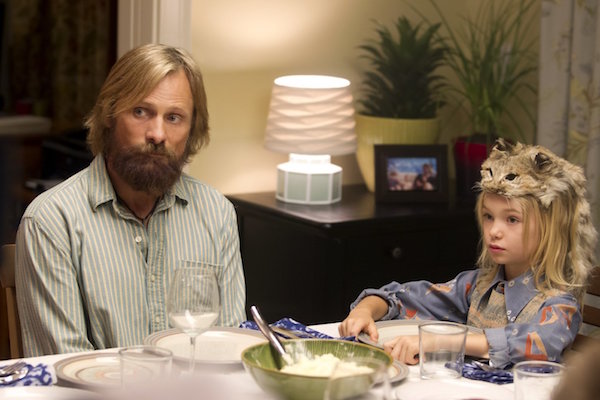 Ben serves his family as father, teacher, tutor, surrogate mother, chauffeur, sergeant, guide, and cheerleader. His family comprises six bright children, whom he home schools while his wife, their mother, is away. They live in the wild, learn many languages, learn to survive and to have each other's backs.

They also learn Ben's motto: "Stick it to the man." They learn there's not a cavalry to come in to save them when they hurt. They should stick to their principles and have evidence to back up their thoughts. Regurgitation is not prized; original thought is. Ben is making his children philosopher kings.

He is not doing this with the support of his family or his wife. He is doing this because he thinks it's right, and he thinks that right up until the time he is challenged by evidence, by his children, by his wife's family.

Captain Fantastic stands out as a film about being honest -- about mental illness, about religion and education, about politics and sex. The film continues this line: Ben stands fully frontally nude as he professes that all men have penises, that they're not a big deal. They are to most movie-makers, but Captain Fantastic does not back down on this point or many of the others, and the movie because a story of contrasts and compromises. It's brilliant.

So is Viggo Mortensen as Ben. He's firm whether leading or grieving; he's an exemplar. He is supported by a fine cast of young people, including George MacKay and Samantha Isler. Kathryn Hahn and Steve Zahn play aunt and uncle and Frank Langella and Ann Dowd play grandparents, standard-bearers of the monied and old-fashioned. Matt Ross, known for American Psycho, wrote and directed Captain Fantastic. He served as pater familias of this family story -- unlike many others in its cunning complexity.