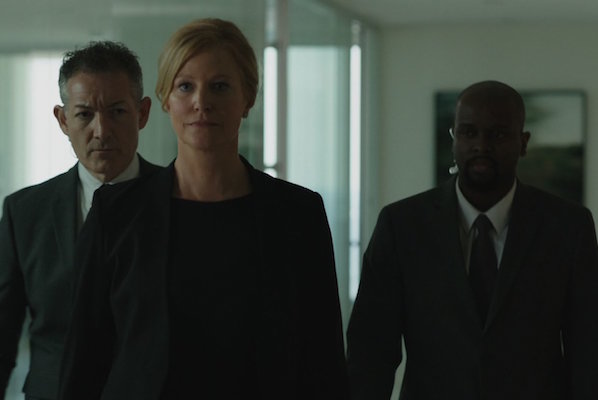 There's not one attractive person in the dramatis personae of Equity. Oh, there are people with well-coifed hair-dos and good manicures and personally-trained bodies, but not one of them has a heart under those pecs. Directed by Meera Menon from a script by Amy Fox, Equity braids three plots.

Foremost is the story of Naomi Bishop, a banker who's had a misstep in master-minding an IPO and doesn't want, dare not, do that again. She is sleeping with a man at the office; otherwise, she has only a beta fish to care for. She is tough as nails, assertive, aggressive, and assimilated into Wall Street culture.

Her assistant, Erin, wants to be Naomi. She's angry. She pushes for a raise, and she insinuates herself into negotiations, but she has to be careful.

Samantha is an old classmate of Naomi's, but now Sam works as a prosecuting attorney, hellbent to find the criminals in Naomi's firm, for there are bound to be some. She stops at nothing, including flirting with a loose-lipped hedge-fundy.

That Menon is able to keep the lines of the story going without befuddlement is a tribute to her direction. Equity is reminiscent of Billions in its multiple story lines and its attention to financial institutions, but Equity runs less than two hours, so Menon has to depend on camera angles, speed-ups, and fine, distinct characterizations.

Equity is a film by women, about women -- lesbian and straight -- and starring women. Take note.