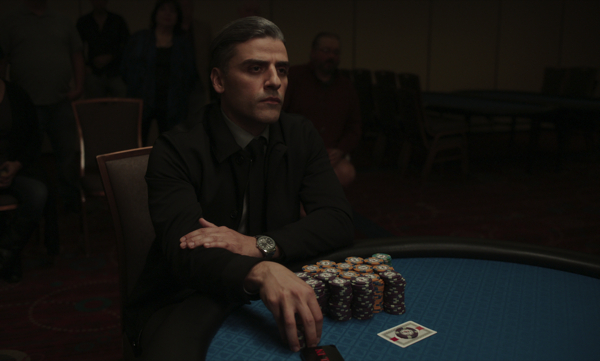 ‘The Card Counter’ exhibits PTSD as he wins at casinos

Buried deep within his PTSD throughout “The Card Counter,” William Tell, aka Bill Tillich, robotically counts cards at blackjack and poker. William had time to develop this talent during ten years in prison, using incarceration to his advantage. Now, rambling alone from casino to casino, he wins enough to get by but never so much the pit boss hassles him.

William has a routine, never staying at the casino hotel where intrusive cameras watch too closely. At nearby motels, upon entering his room, he wraps every object in white sheets, a minimalist environment a far cry from the stench of urine and feces, the screeching noises, and the ferocious dogs attacking prisoners in flashbacks to his Abu Ghraib days as a black-ops interrogator. For those scenes, use of distorted fisheye lenses conveys the unnerving psychological and physical qualities of these repulsive moments.

And so William has shut down to survive. He’s also learned to frequent police seminars because “after a few drinks, they think they can’t be beat,” that is, they’re easy pickings. His world changes at a convention marketing high-tech security items when Cirk, son of an Abu Ghraib interrogator who committed suicide, reaches out to his father’s colleague William. Intent on revenge against Gordo, the man who taught brutal techniques and enforced the torture of prisoners, Cirk bonds with William who now accepts a place in La Linda’s stable of sponsored, expert gamblers. Events progress until William has a seat at the World Series of Poker.

William’s periodic voiceover narration provides glimpses into his psyche, the intent control and cautious restraint. With nothing to lighten William’s burden, Oscar Isaac never deviates from William’s unresponsive, inaccessible presence, delivering a haunting, implosive, superb performance. As Cirk, Tye Sheridan guardedly surveys every situation, always wary but seemingly relaxed. Tiffany Haddish as La Linda injects needed energy, and as Gordo, Willem Dafoe, as always, is convincingly menacing. Robert Levon Been’s and Giancarlo Vulcano’s music intensifies the mood. “The Card Counter” will be compared to writer/director Paul Schrader’s script for “Taxi Driver” (1976), but this film is in a class of its own. “The Card Counter” screens at area cinemas. Check listings.