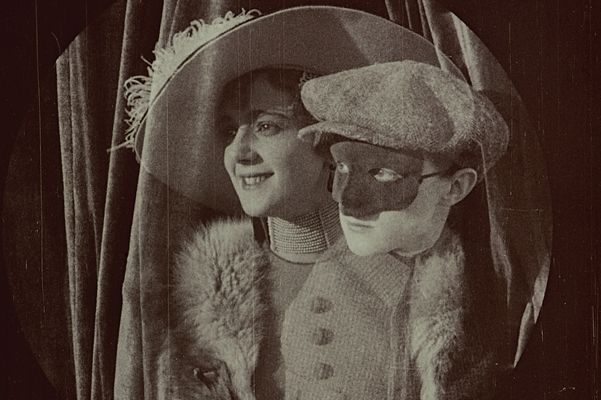 Experts estimate that two-thirds of silent films no longer exist, many not considered and therefore not preserved as historical, artistic treasures or not surviving because of the physical deterioration of their easily corroding nitrate stock. Fortunately, some gems have been found and restored, as is the case for director Mario Roncoroni’s 1915 Italian “Filibus: The Mysterious Air Pirate.”

Advertised in 1915 as an incomparable crime thriller, “Filibus” features a remarkable narrative and dazzling tinting. The amazing story focuses on a cross-dressing woman who, in disguise, appears as the daring thief Filibus, the Baroness Troixmond, and Count de la Brive. Lowered from her dirigible in a gondola by a support crew, Filibus steals from the rich and confounds the police. He now targets the huge diamond eyes of an ancient Egyptian statue while framing famed Detective Kutt-Hendy who has implanted a miniature camera behind one of the cat’s eyes. Sedatives used to take advantage of victims, faked fingerprints, a kidnapping, and a romance: all figure into the clever twists and turns.

Technically, the gorgeous tinting enhances every element, with variations of blue, green, brown, pink, and yellow. When Filibus enters a dark, greenish tinted office at night, he searches for a light switch. When thrown, the room instantly appears in a brighter brown tint. Evening scenes have a pink tint, a villa yellow, the ocean blue, a photograph developing room a red tint, and bright green intertitles by Austin Renna. There’s a diagonal split screen for a phone conversation and an important close-up of the diamonds in what is otherwise an unmoving camera shooting head on with revealing compositions. In a wonderful mystery of its own, the film’s female star, Valeri Creti, was only recently correctly identified.