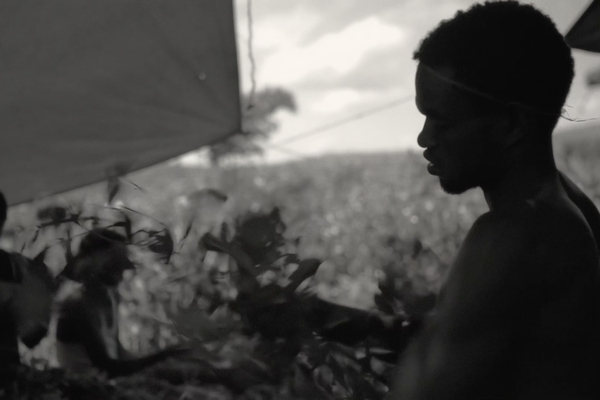 Ethiopians, especially those in the highlands of the Oromo region, previously grew coffee, along with other crops, as a substantial part of their economy. More recently, climate change, including the now dry lakes shown in the film, forced farmers to replace coffee with khat, a leaf chewed for centuries primarily for ritualistic, mystical purposes. Now pervasive in personal use and invasive in community interaction, khat has achieved a universal presence. As a narrator says, “Everyone chews to get away. The flesh is here but the soul is gone.” Mami, one boy featured, is encouraged to pursue his studies, not to chew khat, though he expresses fear of becoming like his father who is, as he describes him, a totally different, crazy person after khat. Several imams represent the Sufi tradition, the fable of Azurkherlaini is described, and some young men strategize ways to escape.

Beshir lived her first sixteen years in Ethiopia, after which her family moved to Mexico. Upon returning to reconnect with family, she writes of noticing that “social and economic life centered on this drug.” Described as trance-state cinema, incorporating religious and mystical elements, meaning “giving birth to health,” “Faya dayi” is director/cinematographer Beshir’s auspicious feature debut, offering a euphoric immersion in the harvesting, cleaning, weighing, bagging, and transporting of the khat leaves. One brief moment of a fire in color is the only break from black-and-white imagery, some in slow motion, some metaphorically presenting entrapment as figures move away from the camera in the high-walled city of Harar Jugol, contrasting with the expansive fields.In Amharic with English subtitles, “Faya dayi” screens at Webster University’s Winifred Moore auditorium Friday, October 15, through Sunday, October 17, at 7:00 each evening. For more information, you may visit the Webster University film series website.