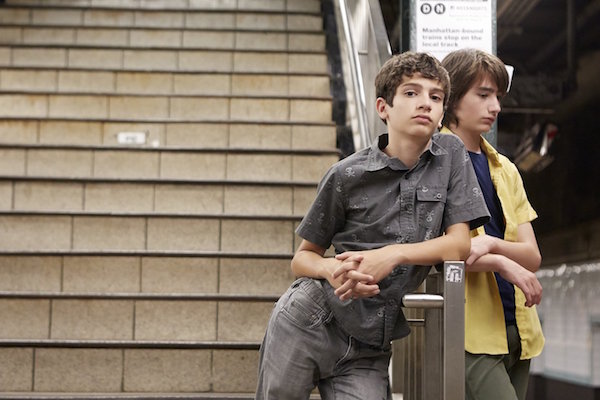 In the appropriately named Little Men, 13-year-olds Jake Jardine and Tony Calvelli are unexpectedly thrown together. After the death of Jake's grandfather, the Jardine family moves from Manhattan to the Brooklyn home father Brian grew up in. Tony's Chilean mother Leonor rents the Jardine storefront for her dress-making business. Economic pressures will test the boys' bond as their families clash.

The difficulties are understandable and regrettable. An aspiring but little paid actor, Brian fortunately has his wife Kathy's psychotherapist practice to rely on for financial stability. But when Brian tells Leonor he must raise her unfairly low rent, she quietly targets Brian's reliance on Kathy, a conflict resolution expert no less. At the same time, Brian's sister Audrey petitions for her fair share of the parents' assets.

All of this plays out against the backdrop of Jake's and Tony's developing friendship, with ripple effects felt profoundly by both of them, especially Jake already struggling to readjust as an uprooted teenager. Wisely, co-writers Ira Sachs (who directed) and Mauricio Zacharias paint in shades of gray, avoiding depicting either family as hard hearted or cruel. They're coping with societal demands familiar to all of us today, i.e. making ends meet. But, as the crisis of losing her shop looms, Leonor uses the only weapon she has, an emotional one. She makes clear that she knows more about Brian's father than he does; and, though calmly, she doesn't hold back on describing Brian's failings in a sexist culture. Little Men builds gradually and honestly, eavesdropping on real conversations tinged with anger and sometimes bitterness.

Greg Kinnear as Brian has always embodied his many middle-class characters with ease. He doesn't rely on off-putting mannerisms or effects. As his wife, Jennifer Ehle feels equally authentic, and Paulina Garcia as Leonor is a great Chilean actress, best known here for her star turn as the title character in Gloria. And the boys, Theo Taplitz as Jake and Michael Barbieri as Tony, convey a documentary quality essential for the emotional impact of the film, especially in the climactic scenes. Technically, director Sachs relies on unembellished camerawork and art direction, perfect for this thoughtful slice of life. Little Men is at Landmark's Tivoli Theatre.