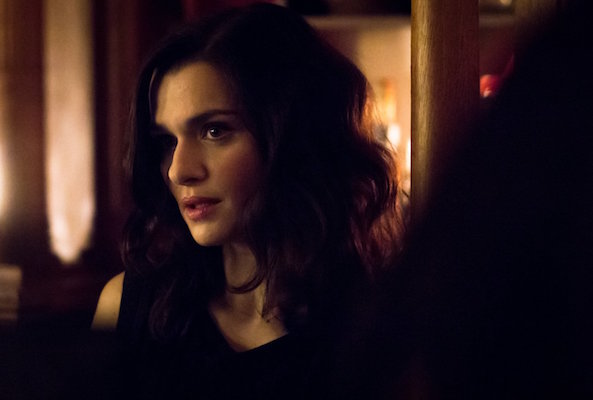 Before the credits role, we see a woman in various rolls: nurse, flibbertigibbet, magician's assistant, scientist. The minute she opens her mouth, to a roommate in Portland, she is incredible, literally, unbelievable -- at least to the audience. But the people inside are more credulous, for why wouldn't they be?

After the credits, we meet Tom and his lovely wife, preparing for Tom's dinner party. Tom. Only his birthday cake says, "Happy Birthday, Tony." Wife allows that she should have checked, but this cake's frosting is the writers' way of letting us know that identities are going to be switchable -- as if the opening scenes weren't a broad enough hint. Tom and his wife are at odds regarding her career and his support of same.

We see this woman, we'll call her Alice because that's the name she's going by, flirt with Tom's assistant, Clyde. Alice accompanies Clyde to Tom's birthday party. Hmmmm? Wonder if she knew that Tom would be there? Wonder if Tom knew that she was an old flame named Jenny? Wonder if we care?

For all the mystery in this short, odd film, the writers, Julian Sheppard and Joshua Marston, play with the reveal and with the re-seduction of Tom by Jenny. Marston, who directed Maria Full of Grace, keeps the camera close up on Alice's and Tom's faces, trying to read them. He uses montages of flashbacks to tell Alice's story as she relates it to Tom.

The main cast brings strong work to this film. Rachel Weisz makes like a chameleon in this role, or roles. Michael Shannon, the lines in his face architectural, is a study in solemn. The supporting cast, Kathy Bates and Danny Glover, glow knowingly all over their parts as an odd couple who interact with Jenny and Tom. The four work better than the material.

Complete Unknown offers a bit of difference to a late summer scene, not a beach film nor a blockbuster.