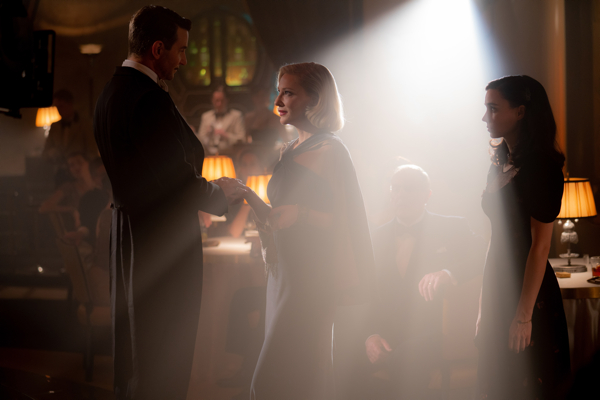 A remake of director Edmund Goulding’s shattering and, at the time, shockingly macabre 1947 noir “Nightmare Alley” may not seem the least bit necessary. But the imaginative Guillermo del Toro, with a screenplay by him and Kim Morgan, proves that this grim story still delivers a powerful experience and a weighty warning in his compelling, superbly cinematic reinterpretation.

Wandering into a traveling carnival, the central character, Stanton Carlisle, doesn’t utter a word for the film’s first ten minutes, though flashbacks haunt and define him. In short order, Stan will get a job and exercise his wily charm to ingratiate himself with a charlatan spiritualist. An accidental death and ambition send Stan and his romantic interest Molly to Buffalo and a glitzy nightclub where, unethical to the core, he plies his devious con. Tarot cards, a geek, a seductive femme fatale, a wary but still gullible wealthy man all figure in. So too, befitting del Toro’s style, are pickled fetuses in jars, called Unborn Wonders of Nature, with the cyclopean baby significantly featured.

Adapted from William Lindsay Gresham’s 1946 novel, the story opens in 1939 with the Great Depression a palpable presence in the appeal of the tawdry carnival and the desperation of the bedraggled performers entertaining audiences hungry for escape. In the 1947 version Tyrone Power redefined his persona with a consummate performance. As Stan, Bradley Cooper shows he too can inhabit an unprincipled, self-satisfied opportunist who deceives others as much as himself. His narcissistic indulgence bereft of any ethics unfolds against a contrasting art deco interior versus a frigid, snowscape.

The dream cast includes Cooper, Cate Blanchett as the psychiatrist, Rooney Mara as Molly, Willem Dafoe, David Strathairn, Richard Jenkins, and Ron Perlman—all giving great performances. For them, cinematographer Dan Laustsen creates three distinctive environments, each uniquely and eloquently depicting the carny, the nightclub, and the psychiatrist’s golden hued office. And yet, the gorgeous upper crust world, it turns out, is no more reliably honest than the carnival one, it just looks better. Set eight decades ago, the relevant warnings still apply, most telling the danger of believing your own lies. “Nightmare Alley” is at local cinemas.