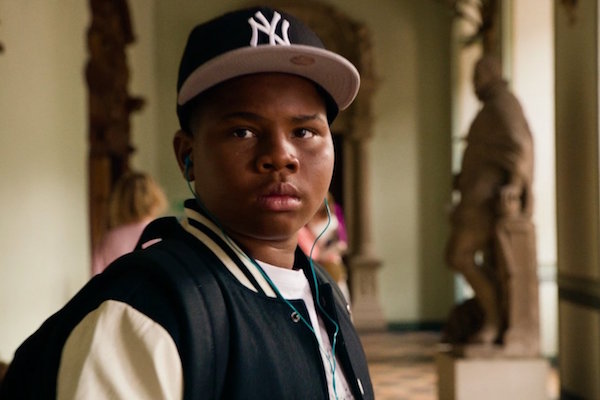 Teenage years are awkward and challenging at best. Quadruple that for Morris, 13 years old, slightly overweight, living in Heidelberg, Germany with his soccer coach, widowed father Chris. Unfortunately, with only the exception of the language barrier, writer/director Chad Hartigan introduces one cliché after another, without supplying insight or anything new to racist, sexist attitudes too familiar here.

The relationship between son Morris and father Chris is the most refreshing aspect of Morris from America. Sure, they squabble over hip-hop and Morris' foolish choices, but their love informs every attempt by Chris to guide his son to smarter choices. Meantime, Morris succumbs to his infatuation with blonde, blue-eyed, 15-year-old Katrin who aligns too often with her bullying male friends.

Except for Morris' need of a German language tutor, this story with pervasive and unchallenged sexist attitudes and stereotypes could be plopped down anywhere in the U.S. The pleasure of foreign films or serious American films with foreign locations can be the opportunity for at least a slightly different perspective, some new attitudes and situations. It doesn't happen here.

Technically Sean McElwee's cinematography is appropriately unpretentious, focusing on close-ups since conversation dominates. In those scenes, Markees Christmas, who plays Morris, shows a fine screen presence as does Craig Robinson as his father. All the teenage German students feel as cookie cutter as the narrative, which is the millstone that sinks this film.

Morris from America skims the surface of its potentially thorny psychology and settles for insulting banalities without confrontation or discernment. The conclusion is equally, particularly unsatisfying. Finally, not surprising by today's standards of the genre, there's a fair amount of crude language in Morris from America, playing at Chase Park Plaza Cinemas. Check area listings.