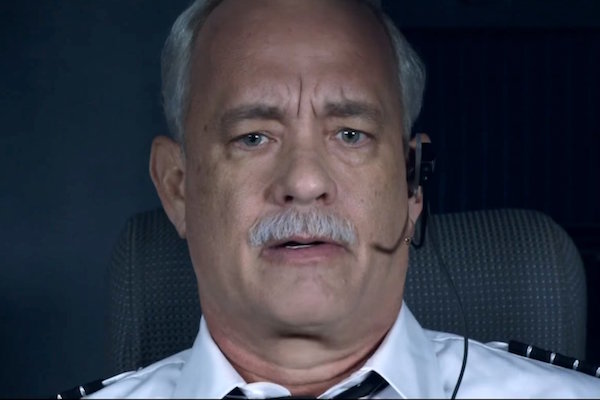 Through post-crisis nightmares, flashbacks, and several of Sully's earlier experiences showing love of and expertise at flying, the story follows the traumatic impact of the Hudson event on Sully, his wife, and his co-pilot Jeff Skiles. While the media touted the fact that all 155 passengers and crew survived, the NTSB, as is required, instituted its own investigation complete with simulations that contradicted Sully's assertions that there was no way to return to LaGuardia or land in Terterboro. Insurance companies and the airline pushed back on the heroic interpretation for obvious reasons.

The private and then public hearings provide the occasion for describing the second-by-second catastrophe. Multiple and overlapping accounts weave flight footage elegantly into the narrative, without it ever losing a second of its drama. As Sully asserts, this was a triumph not just for him but, more accurately, for all involved, including co-pilot Jeff Skiles, the cabin crew, the passengers, and the rescuers. Sully struggles, often jogging to work off his anxiety.

With a documentary style, Eastwood does a magnificent job of eavesdropping on Sully and Stiles' interaction, of balancing information with emotion. Knowledgeable industry people have vouched for its impressive accuracy. We know the outcome and yet Eastwood had me tense and thrilled by every second of the drama.

Though less self-deprecating and less lean than Sully, Tom Hanks, as only he can, communicates Sully's conflicted, pained emotional core and his strength of character. He presents Sully without embellishment straight to the camera that loves to study his face. Why shouldn't it? Aaron Eckhart as Stiles, Laura Linney as Sully's wife, Anna Gunn, the passengers--all are superb. Sully is terrific filmmaking. At area cinemas.