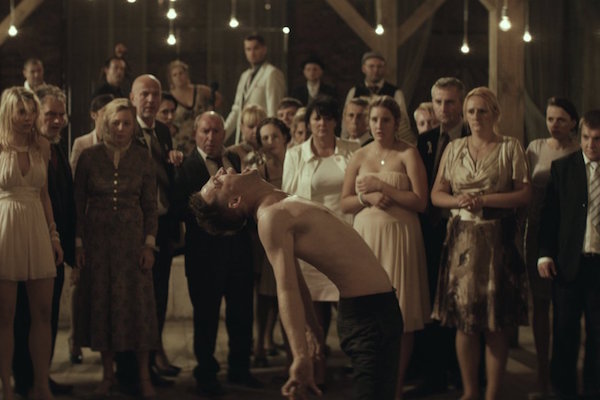 'Demon' channels the horror of the past into contemporary Poland

As Demon begins, a newcomer arrives to a relatively remote, contemporary Polish community. He's ferried across a river amidst none too subtle hints of entering an alternative world. Peter, the central character and groom, will soon endeavor to wed Zaneta in a ceremony populated by friends and relatives, those who support the union and those who don't.

Based on Polish playwright Piotr Rowicki's play, Demon draws on the archetypal dybbuk tales, explicitly referenced in the film. In Jewish mythology, a dislocated dead person inhabits a live person's body, and this being Poland, connections to the Holocaust emerge. Peter will become the vehicle for Hana, speaking Yiddish, and literally and figuratively unearthing the tragic past.

Director Marcin Wrona, who also co-wrote the script, starts Demon slowly, building its premise toward frightening events. The occasion of a celebratory wedding with some heavy rain introduces a palpable tension.

Low light, many scenes with fog, and a few dizzying dances keep the technical elements in synch with the psychological and physical disturbances. The blonde, happy bride will, of course, be subjected to trauma, robbing her of any promising future -- a bitter irony that horror films love to exploit, reducing the blissfully happy to hysterical wrecks. But Demon has more on its mind than unleashing chaos. It proposes and pursues several oppositions: Jewish and Christian, funeral and wedding, hallucination and reality, bliss and trauma, past and present, remembering and forgetting, insider and outsider, ghosts and the living.

Several false alarms, always a bit of a cheat to me, crop up in the early going. And Demon shares another common horror film problem -- it doesn't satisfactorily resolve the chaos it has indulged. But it so wildly and exuberantly jumps into the fray for its unhinged journey that those along for the ride will probably not mind. With smatterings of English, Yiddish, German and Russian but primarily in Polish with English subtitles, at Landmark's Tivoli Theatre.