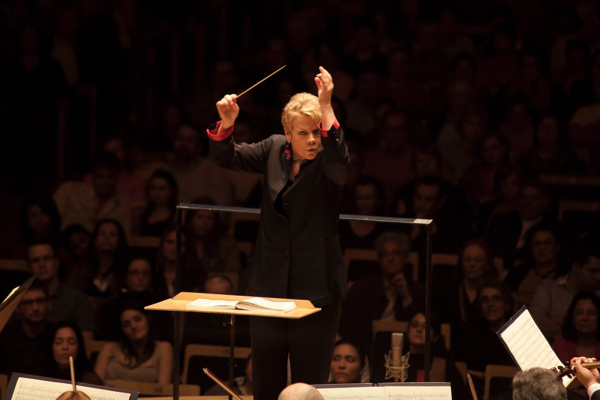 From March 6 through 13 the 27th Annual Jewish Film Festival offers thirteen fiction and nonfiction films, all available virtually, that is, streaming through digital access with technical support throughout the week. A bonus for many programs is the addition of a discussion with the filmmaker, documentary subjects, local speakers, or others associated with the selection.

Here, I’ll highlight three films. Director Bernadette Wegenstein’s appealing, conventional documentary “The Conductor” highlights a most unconventional woman: Marin Alsop. She’s the first woman in history to become primary conductor of a major American orchestra (the Baltimore Symphony Orchestra), among other firsts: violinist and founding member of an all-woman swing orchestra that played together for twenty years, visiting conductor for eight years of the Sao Paolo Orchestra, mentor through Baltimore’s OrchKids and the Fellowship she started for female conductors, plus the first MacArthur Fellowship for a conductor. Deciding on her career at age nine when she watched Leonard Bernstein, Alsop needed fierce determination to succeed, facing oppressive sexism. Through extended interviews with her, watching her work, and archival footage, this warm, wonderful, ground-breaking woman comes to vivid life.

Less impressive but with an important message, “Wet Dog” finds transplanted Iranian teenager Soheil desperate to fit in with the Muslim gang in Berlin-Wedding. Soheil will endure some hard knocks before he learns the importance of his Jewish heritage, but we must tolerate some typical confrontations before Soheil rejects the Iranian saying that gives the film its title, that “a wet dog is better than a dry Jew.” The acting and technical elements do merit praise in a worthy endeavor exploring the destructive impact of prejudice.

Finally, “Tango Shalom” takes a heavy-handed approach to an amusing comedy. Hassidic rabbi Moshe Yehuda faces financial crises. His school is in danger of shutting down and his younger brother frets over money for an upcoming marriage celebration. A fine dancer, Moshe learns of a considerable financial prize for a tango contest. However, he can’t touch a woman, quite a hurdle. He’ll consult with Christian, Muslim, Hindu, and Jewish authorities for a solution in this charming film that only needs us to accept the premise to have an enchanting, uplifting experience. For more information on all thirteen films, you may visit the website.