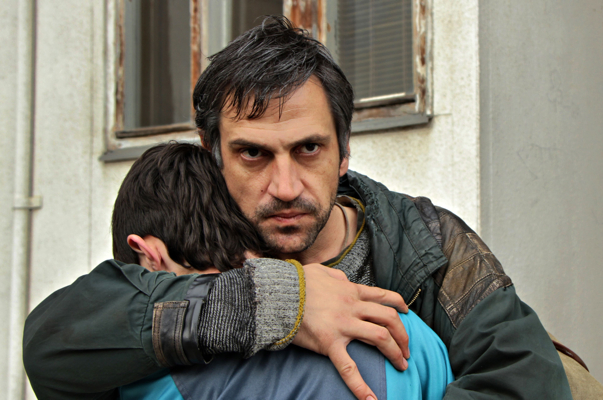 Serbian director Srdan Golubović knows his way around oppressive bureaucracy, as he proves in “Otac” (“Father”). The social system confronted by Nikola capitulates to the corrupt indifference and inhumane treatment of a poor day worker intent on having his son and his daughter returned from foster care to him.

Social Services have asserted their authority after, in the opening minutes of the film, Nikola’s wife self destructively protests employers who won’t pay her husband’s earned salary or severance package. Without resources, Nikola sets out on foot from Grab to deliver a legal appeal to the Serbian Minister in Belgrade, 180 miles away. Some compassionate individuals help, but Nikola’s experiences vary from encouraging to daunting.

As Nikola, Goran Bodgan infuses every scene with his unshakable, unquestioned commitment to his goal. As director Golubović clarifies in a press notes interview, “I wanted the film to start as a realistic drama about a bureaucratic and corrupt society, and then slowly turn into a film about a man who, through the mythic journey he embarks on as a loser and a castaway, turns into a hero. . . a man who tests himself, and reclaims his own dignity,” a dignity, I must add, clearly eroded by poverty and systemic, societal indifference. We’re honored to accompany Nicola on this quiet, moving journey through devastated factories and beautiful nature, interacting with animals and various people. Throughout all Nikola’s emotional incidents, the camera keeps him in medium close up, registering his beautifully nuanced performance, with others kept at a distance.

That actual events inspired the film adds a profound, heartbreaking context. Anyone who has ever tangled with crushing organizational inflexibility, and that probably means just about all of us, will relate to Nicola’s unjust treatment and root for this underdog. But seldom, I hope, have our experiences been so painfully prolonged, though Nikola’s unwavering determination in the face of callous dismissal should inspire all of us to redouble our efforts to advance righteous causes. In Serbian with English subtitles, “Father” screens at Webster University’s Winifred Moore auditorium Friday, April 29 through Sunday, May 1 at 7:30 each evening. For more information, you may visit the film series website.