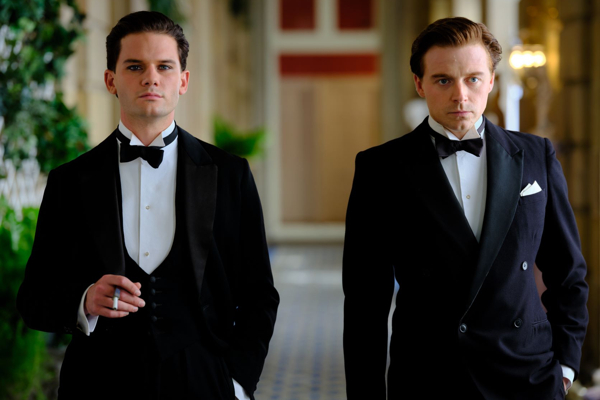 Early in “Benediction,” British writer/director Terence Davies introduces archival WWI footage, grim images that punctuate the entire narrative. Sobering scenes reveal war’s horrors and set the stage for Siegfried Sassoon’s deeply personal objections, through his poetry and his in-person protests to political and military authorities, who reject his critiques. Sassoon knows whereof he speaks, with experience on the Western Front.

Moreover, he distinguished himself, decorated with the Military Cross for courage. His bold protests, read in the British House of Commons, read in part, “I am making this statement as an act of willful defiance of military authority because I believe the war is being deliberately prolonged by those who have the power to end it.” Nevertheless, his initial refusal to return to combat earned him commitment to a war hospital, where he befriended poet Wilfred Owen, who would not survive the war.

Sassoon did reenter combat, but never completely escaped the impact of these experiences. He then moved into another fraught area in the 1920s: accepting his homosexuality, involved with a series of lovers who are, in turn, sensitive, indifferent, and cruel. Too much film time revolves around these relationships with each man trying to outdo the other with clever banter. Soon it’s too easy to anticipate exactly where the affairs are headed and how.

Sassoon did enter a more conventional life, a chapter needing more elaboration, the interrogation of his later character-arc lax. This also means that the women remain marginalized throughout the film. Significantly, however, the war stays with Sassoon, a palpable sadness of which we’re reminded through flashbacks to diverse war scenes, all horrible. The suggestion is that no one who has seen such carnage can ever escape its nightmarish memory, a most relevant emphasis especially today.

Recently seen as River Cartwright of the Apple + TV “Slow Horses” series, Jack Lowden does a terrific job, weaving together Sassoon’s composure, determination, passion, and sadness. Others support him quite well: Ben Daniels as Dr. W.H.R. Rivers, Matthew Tennyson as Wilfred Owen, and Jeremy Irvine as Ivor Novello, among others. Cinematographer Nicola Daley interprets different locations with skilled lighting choices and shot composition, and the art direction establishes a realistic feel for the time and places. Over all, “Benediction” offers a discerning introduction to poet Siegfried Sassoon plus a thoughtful meditation on war. “Benediction” is only in theaters. At Landmark’s Plaza Frontenac Cinema and the Chase Park Plaza Cinemas 5.