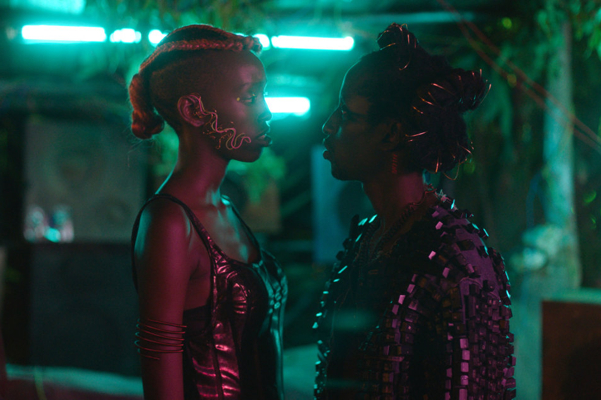 A powerful visual experience with a thorough social critique, “Neptune Frost” is as original and imaginative as it is thought provoking. Described as a “visionary Afrofuturist punk musical.” It’s also a psychedelic protest against exploitation driven by the pervasive global greed. Numerous times I wanted to stop the fabulous singing and dancing to contemplate informed, complex defiance.

The science fiction narrative begins in a Rwandan village constructed of discarded computer parts, and it is literally made of such recycled waste. There miners extract coltan, a valuable mineral required for computers. Revolting and fleeing, a hacker collective MartyrLoserKing (a name reportedly inspired by a French mispronunciation of Martin Luther King) resists and fights smartphone dominance in users’ lives, noting that oppressors “exploit the value of our existence.”

While this may sound like conventional social struggle, the creative interpretation here took my breath away, with exceptional costumes, makeup, and art design. The characters include intersex runaway Neptune (played by two actors), Matalusa, those called Memory, Innocent, Psychology, and Tekno. They, along with their all-purpose greeting Unanimous Goldmine, connotate their metaphoric qualities. As these personalities, the African cast projects a convincing, wildly wonderful world. Credit for that goes to Saul Williams, co-director and writer of the dialogue and the music, who reportedly first conceived of this as a graphic novel and a musical for the theater. Praise also goes to Williams’ cinematographer and co-director, Rwandan artist Anisia Uzeyman.

Shot in Rwanda, set in the Burundi hill area, the natural environment offers a counterpoint, with the title Frost accentuating a lovely, peaceful messenger bird that reappears several times. References to the essential motherboard foregrounds opposition between analog and digital technology spawning a cosmic clash. “Neptune Frost” is brilliant in its song and dance confrontation of our technological world. As the American Williams asserts, “My goal is to transform society through art, to feed the imagination, to challenge apathy and normative thinking.” He has succeeded astonishingly well. In Kinyarwanda, English, Kirundi, Swahili, and French with English subtitles, “Neptune Frost” screens at Webster University’s Winifred Moore auditorium on Thursday, June 23 and Wednesday and Thursday, June 29 and 30 at 7:30 each evening. For more information, you may visit the film series website and check there for any schedule changes.