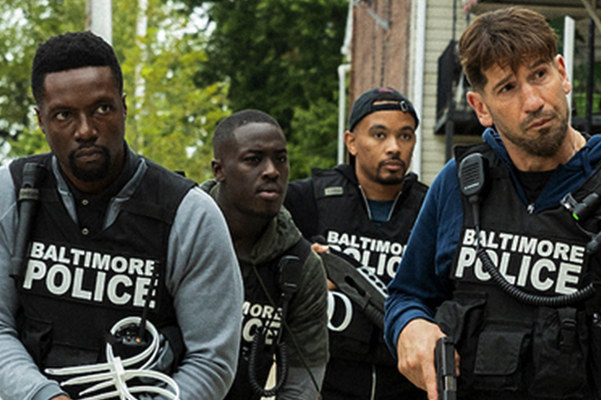 Fans of “The Wire” know the hard-hitting, confrontational social critiques delivered by its creators, George Pelecanos and David Simon. They’ve lost none of their gritty, scathing indictment of dysfunctional communities as proved by the six episode series, “We Own This City.” Based on real events, to our shocking dismay, sequences immerse us in Baltimore’s Gun Trace Task Force.

It is adapted from Baltimore Sun reporter Justin Fenton’s unsettling book titled “We Own This City: A True Story of Crime, Cops and Corruption.” Blatant, unfettered villainy led to the long overdue conviction of eight police officers in 2018 and 2019, but not before they intimidated, robbed, beat, falsely arrested, or murdered numerous individuals, guilty or innocent. All their actions expressed a total indifference to legal procedure or any semblance of justice. There are no spoilers there since the series follows a flashback structure with a parallel plotline following Internal Affairs and Office of Civil Rights investigations in the wake of the killing of Freddie Gray.

As the instigator of the group and driving force, Sergeant Wayne Jenkins, called Jenks, initiates and guides the rapid, sometimes even frantic, action. At times other officers can’t believe his bold criminality, others go along to benefit from the money stolen, and yet another, Sean Suiter, manages to escape the group, at least temporarily. However corrupt viewers may assume this task force, “We Own This City” takes it to another level of fierce brutality.

Director Reinaldo Marcus Green, who also directed “King Richard” about the Williams tennis family, demonstrates his expertise in balancing action with multiple characters’ complexity including revealing reaction shots. As the catalyst Jenks, Jon Bernthal delivers a fierce and fiery performance—astonishing, gripping, and terrifying in equal measure. And as in “The Wire,” Baltimore lends a powerful presence to the nicely composed scenes. As with that series and this one, some have critiqued the blistering, negative portrayal of the task force. However, there is, at its core, a justified outrage at the toll on a struggling, dignified community. With the expected crude language, and not for the faint-hearted, “We Own This City’s” six episodes stream on HBO Max.