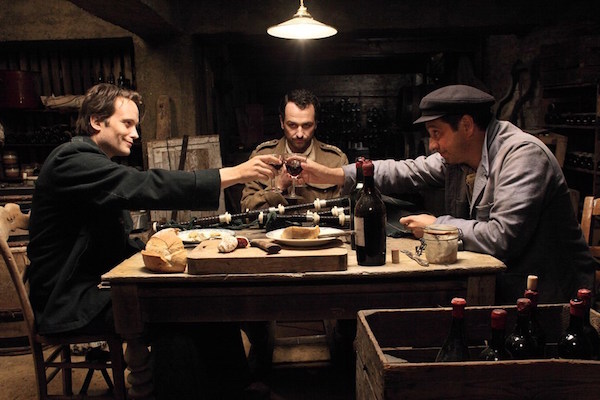 'Come What May' follows French citizens' exodus, May 1940

The title of French director Christian Carion's film Come What May suggests a rather untroubled, relaxed receptivity to life's events. This misrepresents the dire circumstances dramatized as the Germans invade northern France, May 1940, driving almost eight million people from their homes, as opening titles report, "one of the largest displacements of people of the twentieth century."

Dedicated to his mother and based largely on her memoirs, Carion begins and ends the film with powerful, black and white photographs of townspeople fleeing their villages and farms in horse-drawn wagons, barely serviceable trucks, and on foot. The weather at the time was glorious, and many rural scenes look ironically idyllic, graced with streaming sunshine and hard-working citizens, until word of the approaching German army reaches them. With WWI experiences fresh in their minds and with the mayor's insistence, villagers accompanied by a German boy named Max flee in a convoy. The boy's father Hans opposed and fled the Nazis, lied about being German and currently sits in prison. Come What May follows the slow exodus of these adults, children and a Scottish soldier trying to get back to his unit.

As a co-writer as well as director Carion integrates events, derived from various true accounts, and shot in the original Pas-de-Calais region with extras from affected families. This element of WWII has received less attention in war films. The trauma comes through as refugees trudge along calmly with unexpected, horrid attacks suddenly unleashed or accidental encounters destroying any security. These terrifying shifts, presented primarily without added music, are often effective. But other scenes don't flow well with mood changes that veer from melodramatic to romantic, harrowing to emotionally flat. This is despite the fact that composer Ennio Morricone, twelve in Rome during this wartime period, provides a score that too heavily telegraphs the emotions, swelling too insistently.

The acting is very professional by all involved, and Come What May offers an important chapter in French WWII history. The film did need a steadier hand on the helm. In French and German with English subtitles and with a bit of English. At Landmark's Plaza Frontenac Theater.