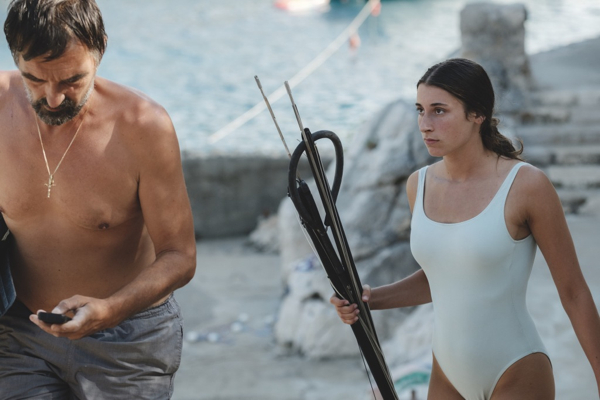 Julija, however, lives with her bullying, overbearing father Ante and intimidated, accommodating wife Nela. When Ante’s wealthy New York friend Javier visits, both Julija and Ante recognize an opportunity. For Ante, it’s a dream of establishing a resort nearby; for Julija, escaping her virtual and, soon literal, imprisonment. Savvy and wary, Javi comments that “dreams die in paradise.” More on target, a woman gutting the eel catch observes, “Look how she bit her own flesh to set herself free.”

An archetypal struggle ensues amidst palpable sexual tension. Throughout, Julija’s point-of-view anchors events. Jujila and others notice her emerging sexuality, the camera too often ogling her, while past events haunt interaction, especially for Nela and Javi.

Cinematographer Héléne Louvart transforms the idyllic, sun-drenched Adriatic environment into ominous, desolate underwater seascapes. The initial scene shows Ante and Jujila spear-fishing for murina, the film’s title taken from the Mediterranean word for the serpentine moray eels. There, dark blue water and craggy, underwater rocks become threatening. Ante once wrecked a boat trying to navigate a narrow passage; and, incorrigible, he insists on defying it again.

As is often the real-life case, the characters reveal themselves but fail to change constructively, each trapped in their stultifying emotions. The actors, however, express an impressive range of subtle reactions in compelling performances. Winner of the 2021 Cannes Film Festival Camera d’Or for Best First Film, in Croatian with English subtitles, “Murina” screens at Webster University’s Winifred Moore auditorium Friday, July 22 through Sunday, July 24 at 7:30 each of those evenings. For more information, you may visit the film series website.