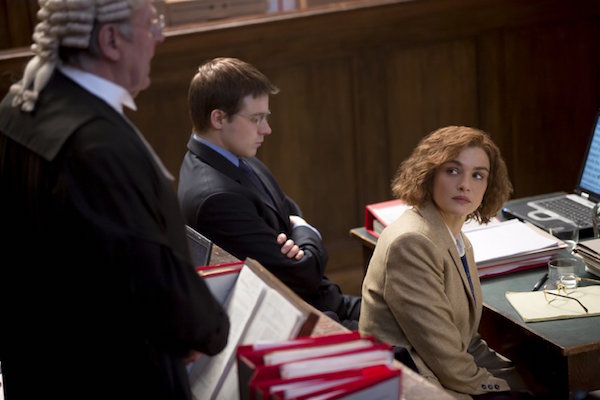 'Denial' -- Despite script issues, it signifies

For years, the Holocaust produced films filled with its horror as history. Recently, however, two films based on the Holocaust extend knowledge of history. If the excellent film Denial is compared to The People v. Fritz Bauer, the past would be well-served into the now.

Fritz Bauer considers the German who pursued his country's war criminals in the Fifties. Denial pursues Holocaust deniers in the 1990s. One of the deniers, David Irving, sues Deborah Lipstadt, a professor at Emory University in Atlanta for libel. As Irving is British, he takes her to court in England, a country where one is guilty until proven innocent.

That is the first of the many hard contrasts Denial must picture. Lipstadt, a brilliant historian, must hush her mouth as her solicitors and barristers plead the case: that Irving had an anti-semitic agenda, period. To effect their case, Lipstadt's lawyers do not call Holocaust survivors or even Lipstadt to the stand; they comb through Irving's voluminous diaries until they find their proof against him. They ask for a judge, not a jury, to rule, and when the judge rules, Irving immediately begins to lie loudly, again and again, reminding sentient Americans of the Republican candidate for president.

Poor Timothy Spall has to play Irving, a blow-hard and bloviator, and excellent actor that he is, Spall nails it. Tom Wilkinson performs well as the hyper-focused lawyer. Alex Jennings, also in The Queen, plays the judge, with few but significant lines. Unfortunately, Rachel Weisz gives a spotty performance as Lipstadt.

That may be due to playwright David Hare's script, based on Lipstadt's book, History on Trial. Exposition gets in the way of real conversation, and the movie often reads like a staged play. But it is awfully good, brilliantly edited, and successfully provocative. "Denial" demands intelligence.