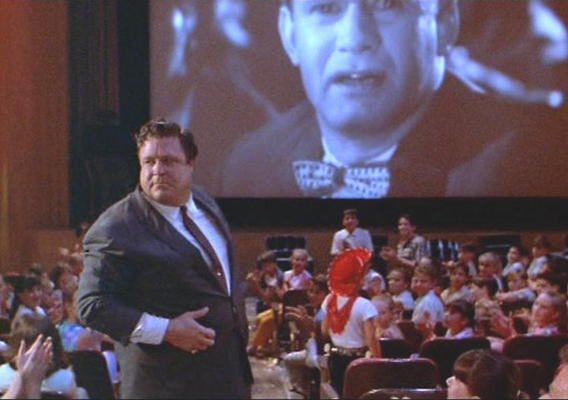 St. Louis native John Goodman stars in and shines brightly in director Joe Dante’s 1993 “Matinee.” Set in 1962, the story offers a trip down memory lane: clothes, hairstyles, cars, old televisions, duck-and-cover drills, and, most of all, a strong strain of innocence for a very different, delightful environment. That’s not to say that the sunny situation lacks crises.

In one subplot, the father of Gene, a central teenager in the story, serves on a ship off Cuba. In that regard, on a TV clip, President Kennedy announces the nuclear threat, and several times footage of the mushroom cloud from a Nevada a-bomb nuclear test figures in the plot. But the focus of “Matinee” is impresario Lawrence Woolsey who shakes up this Key West community with his horror film “MANT!” However, as Woolsey would say, that’s not all, folks.

Two teenage boys, the aforementioned Gene and his friend Stan, their girlfriends, the ex of one girlfriend who is a just-released delinquent (complete with something like Fonzie’s hairdo and jacket), Lenny Bruce records, fear of ‘Commies,’ fake protestors to increase interest—all are on hand. But, above all, Woolsey’s screening is a performance, not just a film. To add to the fright factor and the visceral experience, Woolsey fits the cinema’s seats with electrical buzzers (Rumble-Rama), arranges for tubes to explode with dry ice vapors beneath the screen, and sends a man in a frightening giant ant costume running into the auditorium. In addition, only those who sign a legal release before a nurse can enter the cinema, just in case they’re scared to death. All these details, by the way, are based on real practices. Of course, nothing will go according to plan in the final, wildly riotous thirty minutes.

Jerry Goldsmith’s music lovingly evokes the 60s, as do John Hora’s cinematography and Nanci Roberts’ art direction, taking me back to those colors and that 60s milieu. Perfect casting runs from the frantic theater manager to the fawning promoter and Woolsey’s amusing blond assistant Ruth, a droll Cathy Moriarty. With clever creativity, black-and-white footage of “MANT” is integrated into the colorful “Matinee,” with John Goodman the icing on the cake in a perfect performance. Throughout “Matinee,” director Dante delivers this retro 60s world in a thoroughly entertaining, brisk 99 minutes. “Matinee” screens one night only, Sunday, January 22, at Webster University’s Winifred Moore auditorium at 7:00 p.m. that evening. For more information, you may visit the film series website.