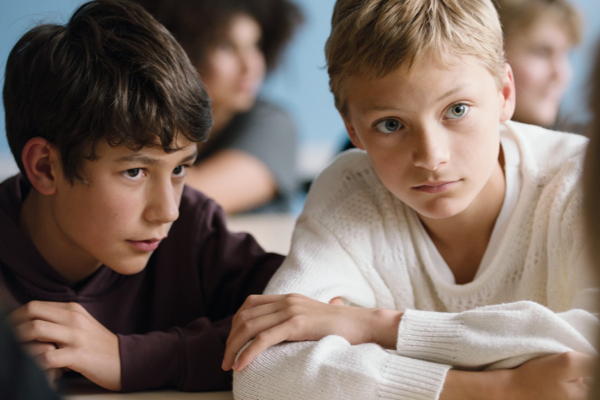 Teenagers are works in progress, testing their values, struggling with decisions, all impacting their evolving identity. In their development, constructive or negative peer reactions matter immensely. Navigating all this, plus repressive gender constraints, lies at the heart of Belgian director Lukas Dhont’s “Close,” focused on thirteen-year-olds Léo and Rémi, enjoying their warm, exuberant friendship in rural Belgium.

Racing their bikes down a country road, running at full gallop through fields of flowers, or just luxuriating in their loving friendship, Léo and Rémi share a rare intimacy. And then they begin school. As co-writer/director Dhont observes in press notes, it is in this arena where “as with all children approaching early adolescence, social pressures and ingrained societal expectations begin to shape, crowd, and suffocate them.” He adds, “When you’re a young boy, intimacy is seen as something that has to be linked to sexuality or femininity.” Exactly this dysfunctional association will alter, in tragic ways, Léo and Rémi’s relationship. The distressing ripple effects will extend to the larger community, a devastating outcome.

Director Dhont presents the developing crisis with sensitive restraint, letting the emotional impact emerge from reaction shots and silences. I’ll say no more about all this in order to honor its delicate, complex unfolding. The revelations do offer profound insight into contemporary struggles. In that regard, in an interview for the Telluride Film Festival where I first saw “Close,” Dhont says he hopes “we are in a positive evolution when we talk about masculinity, allowing fragility and vulnerability, allowing men to depend on each other. But I still get bombarded with examples from the other side,” boys trying to man up for “this archetype of masculinity . . . in the name of not being gay.” Dhont lived this as a gay teenager himself.

Supporting the ideas of responsibility, intimacy, grief, and vulnerability, Frank van den Eeden’s cinematography prefers a shallow depth of field in still scenes, emphasizing characters. Alternately, he moves the camera dynamically, especially with Léo. Valentin Hadjadj’s original music artistically complements scenes. Similarly, metaphors reinforce the message: Léo’s channeling physical aggression into ice hockey, played from behind a mask; gorgeous fields of flowers that become harvested and razed. Throughout all of this, newcomers Eden Dambrine as Léo and Gustav De Waele as Rémi convey with immediacy the depth of their inner world. Winner of the Grand Jury Prize at last year’s Cannes Film Festival, “Close” is in French and some Dutch with English subtitles.