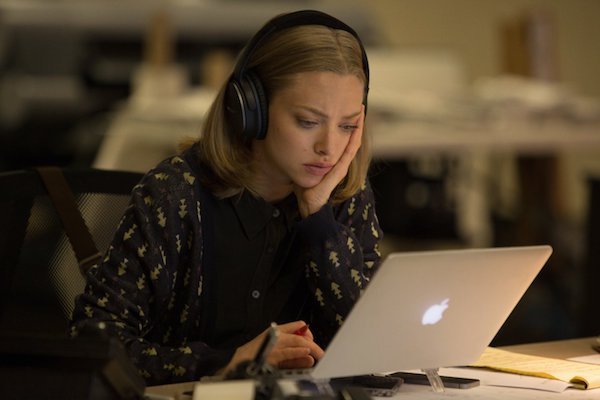 The film The Last Word invites each viewer to attempt, as much as possible, to look at one's own life from a more objective perspective. On the whole, it succeeds nicely, using abrasive, outspoken businesswoman Harriet Lauler as the catalyst. She's 81 when, jolted by a newspaper's striking obituary, she decides hers should be written now, before her passing.

Hiring the paper's obit writer Anne, Harriet's first run at gathering praiseworthy recollections by her friends doesn't yield her desired results. In fact, it's thoroughly disappointing. So Harriet sets out to reshape details of her life. She gets wise-beyond-her-years young black girl Brenda as her "intern" (a patronizing plot point), talks her way into a DJ job, and reaches out to her ex-husband and her alienated daughter. Before long, Harriet's direct, no-nonsense style becomes appealing, refreshing, and even admirable. She often says what we'd all sometimes like to say though politeness dictates against it.

How the viewer feels about The Last Word really depends on embracing this brusque, blunt woman. Few actors besides Shirley MacLaine could sell this combination of hard hearted and yet not mean spirited. A consummate performer, MacLaine knows when to hold still, when to play for nonverbal impact and how to modulate her voice from outraged to surprised. As a woman previously running her advertising company, it's easy to understand her need for strength that segued into aggression. As the obituary writer, Amanda Seyfried does a magnificent job, holding her own in humorous and somber scenes with Harriet, and Ann'Jewel Lee as Brenda all but steals the film. Anne Heche also does a good job as her estranged daughter Elizabeth while Philip Baker Hall brings his mature sweetness to the husband.

Director Mark Pellington knows how to pace a scene, to trust his actors, and let character unfold. Writer Stuart Ross Fink writes interaction that captures the personality without overdoing the point. The magic of a three-dimensional person emerges, one with experience, defenses, and the ability to still learn. Moreover, it's encouraging to see interesting women make pointed observations about values and the need to fail spectacularly to learn and live, to have not a "nice day," but, as Harriet encourages, an honest, direct, true day. At Landmark's Plaza Frontenac Theatre.