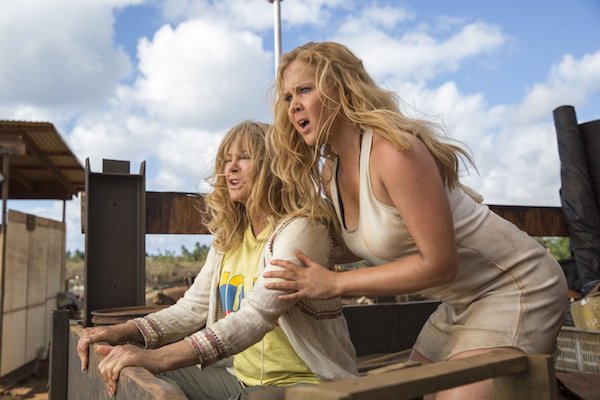 Eight joke ops. Count 'em: eight. Some produce outright laughter; others just acknowledge that a joke landed. But that's it for laughlines in Amy Schumer's latest film, Snatched. Add to that some pretty smarmy stereotyping, and even the feminist device of a mother/daughter plot barely balances the grossness.

Emily Middleton is a selfie-taking selfish woman. She and her boyfriend had planned an exotic vacation to South America, but then he drops her, and she's stuck with a non-refundable ticket. She's reduced to inviting her mother, Linda, along. Linda is a bit helicopter-y in the Mother Dept.: just ask her son Jeffrey, who has agoraphobia and stays close to the woman he calls "maMA."

So Emily and Linda land in Ecuador and travel to Colombia. The latter was not on the itinerary, but swarthy thugs think they can kidnap the women for ransom. However, they have not met Jeffrey. Nor had these bad boys met Linda and Emily, who find moxie in exotic jungles.

The scenes in the South America are lovely, but that's not what you're in the theater for. You're there to laugh at a tapeworm as it's extruded from Emily's gullet. You're there to enjoy watching Emily think of someone besides herself. You're there, admit it, to be grossed out. Snatched delivers, from the title on down, way down. Down to about Hangover level.