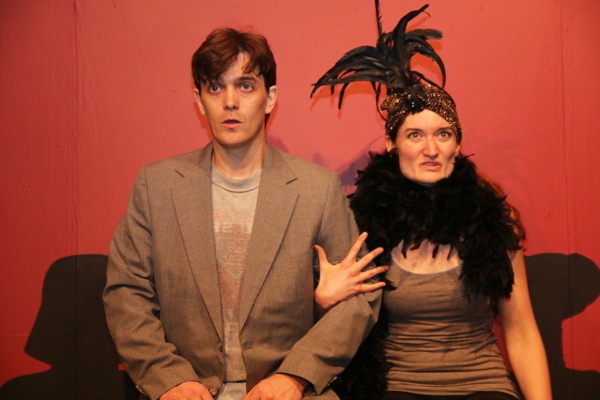 In a 90-minute show that flies by at breakneck speed, the quip filled parody touches every movie on the institute's "greatest films list," finding surprisingly fresh and increasingly ridiculous humor in scripts and scenes that have become part of our common vernacular. Fittingly, there are also a few straight, almost dramatic moments. Due to subject matter and history, not every film on the list lends itself to parody and the company wisely acknowledges these moments with understated simplicity. But the majority of the show is filled with over-the-top laughs and gleeful excess.

An aspect of this show that I genuinely appreciate is the relative absence of company and theater community in-jokes. While they can add to the sense of poking fun at an industry that often takes itself far too seriously, this particular show, with its lengthy count down, benefits from the restraint. Frankly, there's so much to be mined from the 100 films -- from their titles, to famous and infamous lines of dialogue, to overt themes and not-so-subtle commentary -- there simply isn't a need or room for additional shenanigans. And there are shenanigans aplenty.

The video display counting down the list of titles is also helpful, though the majority of the films are instantly recognizable, and a few don't need much dialogue at all to convey. Shualee Cook, Roger Erb, Chris Jones, and Ben Ritchie crafted the playful script from a concept by Suki Peters, who also provides direction and the bell. The cast keeps things moving at a very fast clip and makes fun of the occasional use of a bell sound when it isn't part of the countdown. There are also more than a few winks and nods to the audience, as well as a couple spectacularly explosive moments (consider yourself warned, audience members in the first few rows).

The costumes and props are cheap and obviously handmade, but even this is an important part of the company's approach. The script cleverly weaves its way from one familiar quotation to the next "I remember that" scene without losing momentum or focus, a task that's decidedly more difficult than it appears on stage. At first glance, particularly if you're a movie fan, it honestly feels natural to think, "Oh, I know all these movies, I could totally do this," but familiarity is often a trap. The company succeeds by ensuring the focus is on the material and the laughs, and the laughs are plentiful. There are also a number of spot on impressions strewn throughout the evening, a telling reinforcement of the talents and abilities on stage.

As usual, the company doesn't take itself too seriously. While a few movies do receive a more serious interpretation, it's quite clear the company has no sacred cows and the cast is willing to exhaust themselves each performance to ensure the audience is in on the joke. For sheer fun that pays its own twisted homage to our favorite movies, Magic Smoking Monkey Theatre's AFI's Top 100 Greatest American Films of All Time: A Parody!, running though July 15, 2017, is a real summer blockbuster.