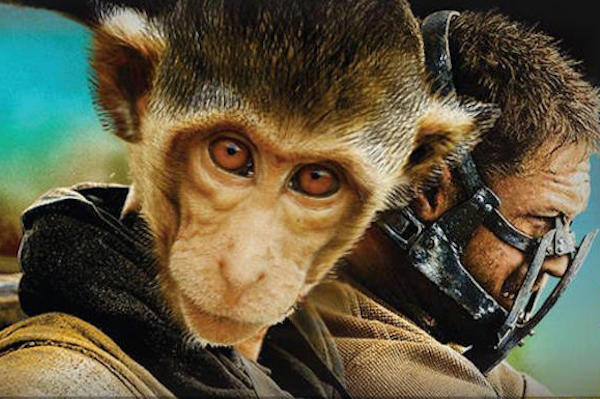 Once again, St. Louis Shakespeare’s offshoot comedy troupe, Magic Smoking Monkey, has succeeded in creating a lightening quick retelling of a successful film franchise with a cult-like following. This time, it’s the post-apocalyptic road trip of Mad Max: Live!, which includes a visit to the Thunderdome and an epic battle on Fury Road.

Mad Max: Live! continues the company’s tradition of creating barely contained chaos that may or may not spill into the audience. We are introduced to Max and the rest of the cast through quick moving scenes that deliver all the important details and key moments from the movie franchise, emphasizing the over-the-top story with a nod and a wink. There’s also a comically excessive amount of flying body parts, weapons and other sundry objects. To cap off the madness, the ensemble’s campishly on-point version of “Rolling on the River” may in and of itself be worth the price of admission.

Although I’m not as familiar with this franchise as the writers and cast, I could easily follow the show’s progression through the films and was surprised at how many characters I recognized. And while the script is stuffed with jokes and exaggerated characterizations, the story is clearly communicated and complete, creating a satisfying arc. As is the company’s style, they generously sprinkle in cultural references that go beyond the movies, upping the comedy with sly but satisfying quips.

The show pivots around Ben Ritchie, playing the stoic, mysterious Max versions one through three before turning the character over to Charlie Barron. In many ways, Ritchie is the straight man in this show. Though he gets in his fair share of verbal jabs, he often says more with an over-the-shoulder glance to the audience, an exasperated sigh, or a dumbfounded stare. With this approach, he perfectly punctuates the humor and ridiculous plot lines without straying from character.

The entire cast commits to the over-the-top exaggerated characters in delightfully strange and comic ways. Ritchie is matched, arched eyebrow for pointed gesture, by Nicole Angeli as the tough but sexy Furiosa and Carl Overly, Jr. as a diva-licious Aunty Entity. Charlie Barron, Jamie Pitts, Dustin Allison, and John Wolbers are gleefully twisted and tightly wound in a number of roles. Stan Davis, Brennan Eller, Roger Erb, Britteny Henry, Amy Key, Morgan Maul-Smith, and Cliff Turner round out the ensemble playing a number of supporting characters and adding to the onstage cacophony.

Suki Peters directs the show with a light touch that focuses on the comic parody without neglecting the story at its center. The sparse stage suits the production well, and the props and set pieces are effective and quickly moved in and out of place, helping to maintain the breakneck speed of the performance. The costumes are appropriately hodgepodge, with a few fanciful and tragically chic pieces thrown in for both comic and visual interest. Video is used effectively throughout, helping with transitions and comically mimicking a green screen effect during several scenes, and a number of sound and lighting effects provide a little extra bang to the show.

While light, pop culture driven comedy isn’t for everyone, Magic Smoking Monkey Theatre’s latest is a delightfully weird and enjoyable production that delivers laughs aplenty. The company’s core creative team put together this clever parody, and the collaborative nature of the ensemble ensures that the show succeeds for a broad audience. For a healthy dose of unadulterated silliness that thoroughly entertains with relentless humor and non-stop action, Mad Max: Live! is a sure thing.