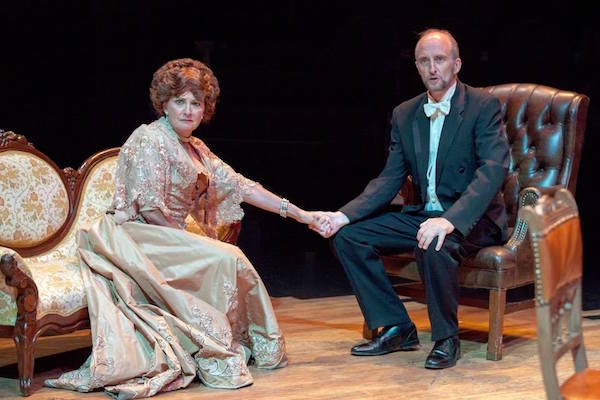 'An Inspector Calls' is a suspenseful period play, wrapped with a heavy moral

Act Inc. dips into the territory of lesser-known plays from the golden age of theater for the second production in its two-show summer season, An Inspector Calls. The solid cast wraps their talent around the story, language, and heady dialogue, but the script feels sloggy and dated. The result is an enjoyable, if predictable, show that drags on a bit longer than it should.

Set in England in 1912, the Birling family is just finishing a celebratory dinner with Gerald Croft, son of Mr. Birling's business rival and recently engaged to daughter Sheila. Mrs. Birling hovers around the group expectantly, while younger brother Eric looks on with disdain and several helpings of port. The group creates a perfect picture of affluence and contentment, sprinkling in just enough judgmental dialogue to alert the audience that something is about to change. Just as the family is finishing their meal, Inspector Goole arrives, presumably from the local police department, to ask the family a series of questions about a mysterious young woman who died earlier that evening.

Through the course of the questioning, family members break down, unpleasant secrets are revealed, and everyone is made quite uncomfortable by the inspector's impertinent attitude. This is where the morality tale comes in, as it turns out each family member may be in some way complicit in the death of the young woman. Even the fiancé Croft is not above suspicion, although the inspector is careful to limit the information he shares in his directed and pointed inquiries. The mood of the show quickly shifts from celebratory to suspenseful as the inspector meticulously gathers answers.

Charlie Heuvelman is perfectly perfunctory as the inspector, while Colin Nichols and Liz Hopefl are rather dismissive of the lower classes as the Birling parents. Sister and brother Courtney Friday and Joshua Parrack are spirited and more liberally inclined than their parents, while Anthony Wininger, as the fiancé, strikes a balance somewhere between the generations. Each actor brings individuality and life to their performances, but the characters are stilted and broadly dated, traits that are not helped by languid pacing and indecisive movements.

Written by John Boynton Priestly near the end of World War II, An Inspector Calls is a dense combination of mystery, drawing room play and morality tale. Under the direction of Jane Sullivan, the capable cast puffs, struts and declares themselves above the problems of the working class in the intricately woven story that is nonetheless absolutely transparent to a modern audience.

The characters align with the story and time but are a bit over-generalized to satisfy the needs of the moral. Each represents the indifferent ways the affluently comfortable treat the working class, become a characterization rather than infused with distinctly individual personality. Good casting and sympathetic-leaning direction ensure the characters are likable despite a lack of depth, but it's not enough to temper the show's overblown moral persistence.

From a technical standpoint, the show is quite enjoyable to watch, with a smartly efficient set, with the design and properties coordinated by Jason Flannery, fine sound and lighting by Zoe and Michael Sullivan, respectively, and lovely period costumes designed by Lisa Haselhorst. Scene changes are easily done and I appreciated the attention to detail needed to open each act with the previous act's tableau.

Act, Inc. is known for reintroducing audiences to forgotten work, and I generally applaud their efforts and enjoy the plays they choose for their short season. This production is a pleasant enough show and the performances solid, but it just doesn't play well to contemporary audiences. The plot lines and story twists are too easily unraveled to create effective suspense, and the moral feels heavy handed and overbearing. Unfortunately, Act Inc.'s An Inspector Calls , running through June 25, 2016, may be a period piece that's better left on the shelf.