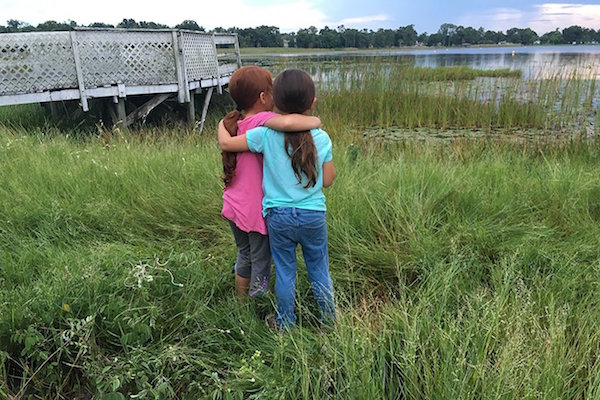 Director Sean Baker's film The Florida Project exposes the chaotic, unsettling world of the hidden homeless, that is, those families, usually with one parent, living week to week in budget motels. That's where six-year-old Moonee, her mother Halley, motel manager Bobby, and several of Moonee's friends live. Over the course of a summer, life is rowdy, joyful and increasingly distressing.

The title The Florida Project comes from Walt Disney's working name for EPCOT which he envisioned as a utopian world. But right down the road from Orlando's Disney World, along Highway 192, run-down motels house numerous children. Ironically, what once passed for tourist housing still bears fanciful names and vibrant colors; for example, Moonee's home is a flamboyantly purple place called the Magic Castle.

From the child's perspective from which the film unfolds, many of the days are magical as the young girls and boys run wild, absent adult supervision beyond periodic intervention by Bobby. When around, Moonee's mother adds to the mayhem. Director/co-writer Baker says he likes to describe his and co-writer Chris Bergoch's project as "a modern day 'Our Gang aka The Little Rascals.'" It also focused on children's adventures against a backdrop of poverty.

The plot consists of loosely linked events in Moonee's days, full of wildly energetic play, with the camera adding momentum as it races to keep up with the children or to track alongside them. Cinematographer Alexis Zabé's color scheme adds even more energy with an aesthetic he calls "blueberry ice cream with a sour twist." That sour twist comes from the adult world that inevitably intrudes, through a pedophile who ambles in, the security guard who runs Halley away from the nice hotel where she's hawking perfume at a discount, or the investigators after Halley steals from one of her Johns. Fantasy can be indulged only so long before the real world insists on attention.

Superb acting by the children, Bria Vinatie as Halley, and a terrific Willem Dafoe as Bobby makes a difficult film engaging. It takes courage to present this tragic struggle with poverty -- and some fortitude for the audience to confront it. At Landmark's Tivoli and Plaza Frontenac cinemas.