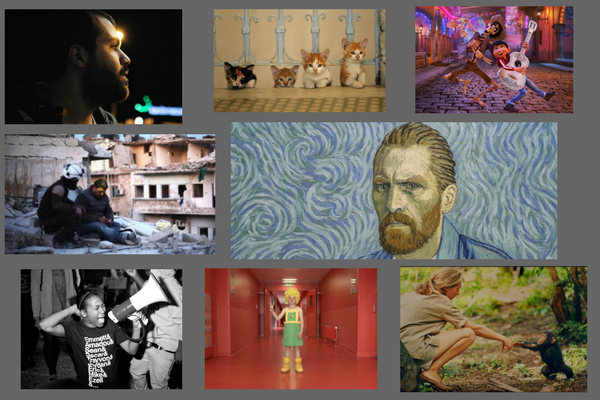 Top animation and documentaries of 2017 are superb, inspirational films

In addition to the top fiction films, I want to applaud exceptional offerings in the animation and documentary categories for 2017. First, there has never been a production like Dorota Kobiela and Hugh Welchman's "Loving Vincent." It presents 65,000 oil paintings featuring Vincent Van Gogh's work as the foundation for interrogating the puzzling circumstances of his death.

Taking ten years from idea to screen, the entirely hand-painted, 94-minute film segues from one scene to another with voiceover dialogue from a fine cast. It is totally captivating. So is "Coco," Pixar's groundbreaking, energetic story that follows young Miguel pursuing his dream of becoming a musician. Firmly and accurately detailing Mexican family and religious culture, it brings the Day of the Dead, Dia de los Muertos to vivid, exuberant life. In acknowledgement, "Coco" is now the all-time most popular movie in Mexico and a huge hit here as well.

Documentaries offered some of the best cinema of the year. Leading my list is "Jane," surveying Jane Goodall's life and her scientific, pioneering research in the Gombe Stream Game Reserve. Goodall unsentimentally and insightfully recounts her extraordinary experiences. Also for animal lovers, "Kedi" focuses entirely on the cats of Istanbul in a heartwarming tribute to the felines and the kind people who love and care for them.

Heartbreaking best describes two films about real heroes: "City of Ghosts" and "Last Men in Aleppo." The former details the 2014 resistance activities of RBSS, which stands for Raqaa Is Being Slaughtered Silently. This previously beautiful, joyful Syrian city with a proud heritage, now witnesses atrocities to which ordinary citizens courageously respond. Similarly, "Last Men in Aleppo" follows the Herculean efforts of the White Helmets, a group formed by the Syrian Civil Defence to rescue civilians targeted with barrel bombs. Both describe dire circumstances we need to acknowledge and understand.

Closer to home, "Whose Streets?" examines the Ferguson initiated Black Lives Matter movement for justice through enlightening and informative personal stories. Less accessible but worth finding is the French film "When I Was 6, I Killed a Dragon," the surprisingly funny and upbeat story of six-year old Annabelle, diagnosed with leukemia. Through fantasy and slapstick, death gets put in its place. All of these films lift our spirits as they inspire us.