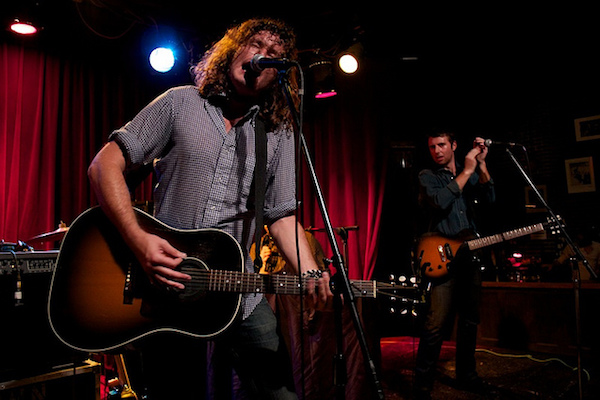 In the grand scheme of things being a "local" musician doesn't necessarily mean much to national media. However, when you're putting out quality work and incorporating some of the best musicians in your community the significance is undeniable. John Henry Parr, or John Henry as it goes, has proven to be a talent beyond the oversimplification of "local musician." His most recent album Dark City, Dark Country was released this past September, the same day he played Loufest 2016, and has been gaining momentum ever since.

John Henry, previously known as John Henry and The Engine, scaled down the name in the past year or so as an effort to expand his capability to take on live shows in whatever format they were offered, regardless of the availability of additional musicians. "I was spending a lot of time in Nashville and I was noticing the flexibility that a lot of these musicians had playing with a lot of different people," says Parr, "I wanted that flexibility of being a solo artist without wanting to hurt anybody's feelings. So if I wanted to play a show I could put a band together and play it -- even if somebody couldn't make it," which can oftentimes be the case.

Parr has assembled an all-star cast for his regular line-up. "All the guys in the band are in that situation with other projects too," says Parr. Involved indeed. John Horton (The Bottle Rockets) recorded on three of the songs from the record. Other St. Louis music alums include Bryan Hoskins (Cold Hearted Strangers, Red Eyed Driver) and Jordan Heimburger (Red Eyed Driver, School of Rock St. Louis), and Tony Barbata (St. Louis Drum Lab) all have their own commitments to other musical endeavors both in and outside of the city.

Parr has constructed a band of seasoned professionals with which to collaborate both in the studio and in a live setting. The final product translates as a well-constructed rock band with solid notes from acts ranging from Hall and Oates or Rick Springfield to Modest Mouse or New Pornographers. Hoskins and Heimburger especially throw in unique textures with the flexibility to provide a gang vocal sound that would give Arcade Fire a run for their money, while at the same time they are able to put forth the eloquent, precise harmonies that would rival pros like the Indigo Girls or The Everly Brothers. "I'm a big believer in that everything you listen to somehow filters into what you end up writing," says Parr, "Ultimately, I just want to sound like me. I think that this records sounds most like me than ever before."

Dark City, Dark Country was recorded with St. Louis' own David Beeman at Native Sound on Cherokee Street. "John's dedicated to the craft creating a song. His attention to every detail is truly impressive," Beeman stated. The product is a solid representation of a rock band who knows exactly what they're doing. The album is a versatile; at times aggressive, at times vulnerable with a wide-ranging appeal. "I consider myself, our band to be a Rock-n-Roll band," Parr states, "but there's Americana, some blues, a little country, modern tones -- but ultimately it's rock."

John Henry will be debuting the video for his song, "Fade to Black" at Off Broadway on Saturday, February 4, followed by a show with his band, Letters to Memphis, and The Brothers Lazaroff.