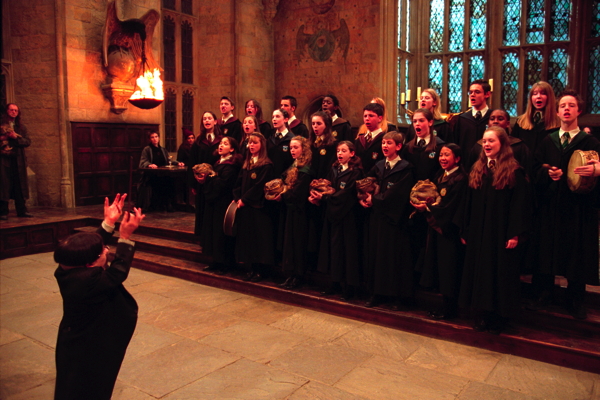 It was a magical afternoon this Sunday (April 8, 2018) as Powell Symphony Hall filled up with witches and wizards of all ages, many in the colors of their favorite Hogwarts Houses. They were gathered for a showing of "Harry Potter and the Prisoner of Azkaban," with the John Williams score played live by the St. Louis Symphony Orchestra and Chorus, directed by composer/conductor Justin Freer.

They were rewarded with combination of music and film that could only be called enchanting.

I've seen many film concert events at Powell over the years, but this was one of the best. The dialog tracks of the movie, to begin with, had a clarity and presence that has often been lacking in earlier blockbuster film events. Even when the massive, Mahler-sized orchestra was playing full tilt, I could make out every word. Better yet, the dialog was all closed-captioned.

And it was, of course, the music that was the real attraction. "Prisoner of Azkaban" was the third and last Potter film for which the great John Williams would write the entire score, and a wonderfully rich and detailed one it is. The big action sequences have all the excitement one would wish for, but there are also many interesting smaller touches, like the live folk-inspired violin solo that introduces the first scene in Hogsmeade Village and the pseudo-Renaissance dances that underscore sequences in the Hog's Head Pub.

Mr. Williams has also given the chorus some interesting material, including a complicated setting of lines from Act IV of Shakespeare's "Macbeth" ("Double, double, toil and trouble") and a lively tune for Christmas carolers in Hogsmeade. There's also a lovely wordless choral passage that accompanies Harry's first successful invocation of the patronus charm in Professor Lupin's Defense Against the Dark Arts class.

All this was performed with the virtuosity I have come to expect from the SLSO musicians. The individual solo lines were crystal clear, the expanded brass and horn sections played heroically, and the oversized percussion battery had power and exactitude to spare. Mr. Freer, whose company, CineConcerts, produced the event, brought it all together brilliantly. My only regret is that an attack of the flu prevented me from seeing the showings of "Chamber of Secrets" earlier this week.

There was an additional bit of good news for Potter fans at the top of the program, when Mr. Freer announced that the SLSO planned to present the remaining five films in the series as well. If they're prepared with the same care this one was, I'm very much looking forward to them.

The regular St. Louis Symphony Orchestra season resumes this coming weekend as David Robertson conducts the orchestra and pianist Simon Trpceski Saturday at 8 pm, and Sunday at 3 pm, April 14 and 15. The program includes Rachmaninoff's Piano Concerto No. 2 and Hanson's Symphony No. 2, "Romantic". The Saturday concert will be preceded by a pricey dinner-and-cocktails gala to honor Mr. Robertson, whose tenure as the SLSO Music Director ends next month. The concerts take place at Powell Symphony Hall, 718 North Grand in Grand Center.