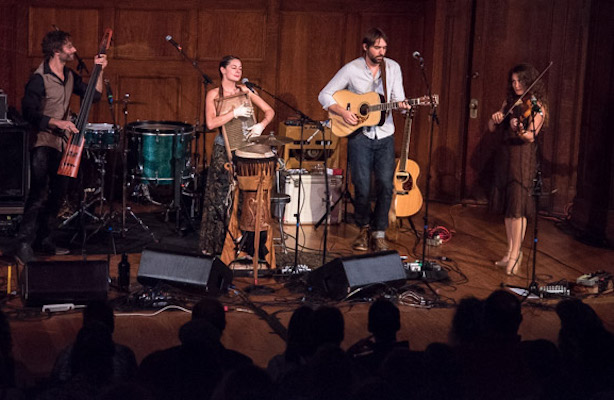 Elephant Revival touches hearts and minds at The Sheldon, September 24

From their earthy Rocky Mountain roots, Elephant Revival brought a sense of musical communion to speak justly for themselves and unify those in attendance in a well-received performance at the St. Louis Folk and Roots Festival Saturday night. Now in its fifth year, arrangers Kelly Wells and her husband Ryan Spearman dug into their past spent in Colorado to task some old friends to the headline this year's event at the Sheldon Concert Hall.

Setting the tone for the evening was two-time National swing fiddle champion Katie Glassman and her partner, guitar player Greg Schochet. The Colorado-based duo, who also play together in another project, Katie Glassman and Snapshot, effortlessly picked their way through the American songbook during their 50 minute set with folk traditional numbers, songs by notable folk songwriters as well as swing jazz and Texas fiddle tunes. The set list demonstrated their wide-range of tastes and influences with "Old Grey Mare" by Norman Blake, Bob Dylan's "You're Gonna Make Me Lonesome When You Go," Jimmie Rodgers' "Peach Pickin' Time," and even featured a song they had never performed live before, the Mills Brothers' "You Always Hurt The One You Love." Represented were timeless styles of American music over the last 100 years, but Glassman and Schochet thoughtfully honored them rather than nostalgically pining for the past. Both performers shined on their respective instruments while winding together runs tightly. Glassman's clear voice stood out as one that could have fit into a 1930s swing band era group or a modern folk or bluegrass outfit.

In a segment seemingly flooded with folk groups focused on strong harmonies, Elephant Revival stands out as an ensemble moved not only by the social forces enveloping our everyday lives, but also the natural environment which surrounds us which we shape -- and sometimes destroy. A decade into their career, the band's stance may have come to use their music to put an emotional emphasis upon the issues they find important. One of these issues is the struggle of immigrant and refugee families as highlighted by their new song, "When I Fall." The group's value of the world around them seems to equal the effort they put into creating these intricate pieces.

On Petals, their latest fourth record, the band has expanded their sound with pedal steel from guitar and mandolin player Charlie Rose and cello from vocalist Bonnie Paine to augment the work being done by bassist Dango Rose, guitarist Daniel Rodriguez and fiddle player Bridget Law. To support the live setting, the quintet even added more percussion with a lineup addition.

The name of the new album serves as a metaphor for the fragile life of a flower that can be lost at any moment with a gust of wind or heavy rain, while some make it to the end of the season only to succumb to the eventual shrivel in autumn. These new songs give you that life-is-fragile feeling throughout and therefore resonate.

The tall, handsome Rodriguez led the group on a new song, "Home in your Heart" to begin the proceedings. Highlighted by subdued vocals from Rodriguez reminiscent of Richard Buckner and stellar fiddle work from Law, the spacey drone drew the audience in immediately. The set continued to get stronger with the gorgeous "Season Song" featuring the blended vocals of Rodriguez and Paine with musical saw work from the latter.

The music of Elephant Revival is both powerful and vulnerable with raw elements that shed light on our fragile humanity. On songs like "Remembering a Beginning," Paine's bluesy, ethereal lead vocal work blends the band's intricate instrumental elements into a cohesive structure that emphasizes the sensitivity of the songs. Paine further capitalizes on her unique voice to not only sing, but use it as a precise musical instrument adding her natural tremolo. This was evident as the main set ended with the gospel-tinged "Rogue River" which allowed the audience to clap along and sing and stretch a bit.

For the encore, the band asked Spearman out to play mandolin and used the Sheldon Concert Hall's legendary acoustics to their advantage to play off the mics at the apron of the stage for a sing-a-long of one of their older songs, "Good Graces." Before they began, Rodriguez made an effort to teach the crowd the words to sing along, but didn't fully succeed as it was hard to hear some of the words. By the end, the audience had made the effort to catch on though. A note to the band that a clear, confident voice to the audience can do wonders to help everyone in attendance onto your side with gusto.

To cap the evening, Glassman and Schochet appropriately joined for a version of  "Over the River" a bluesy song that could as easily been part of the Sam Cooke repertoire over a half century earlier. The musical communion ended with solos from everyone and smiles on the faces of the St. Louis audience.