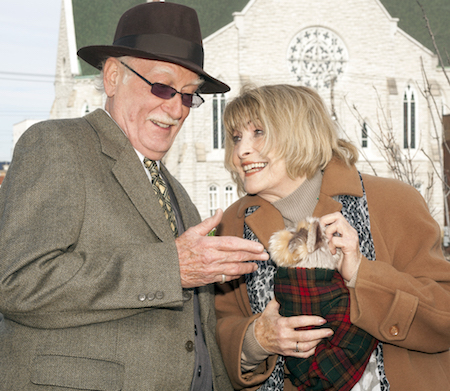 Opera and dogs set the tone for ‘The Last Romance,’ a tender tale of love at any age

Insight Theatre Company treats audiences to a sweetly satisfying staging of Joe DiPietro’s “The Last Romance,” a gentle ode to finding, or at least being open to, love at any age. Anchored by veteran actor Joneal Joplin and featuring arias from Clark Sturdevant, the production is a warm and tenderhearted diversion that feels instantly familiar and comfortable. And, while the show successfully makes a case for the benefits of remaining active and curious as we age, the lessons about love and friendship are delivered in a way that’s applicable to any one, at any age.

Joplin plays Ralph Bellini, an octogenarian with a deep reverence for the art of opera who hasn’t lost his sense of adventure despite his advancing age. A man of habit and routine, he surprises himself one afternoon by deciding to take a different path on his daily walk and ends up sitting on a bench in a dog park. It’s there that he crosses paths with Carol Reynolds, an attractive, mature woman who initially refuses all of Ralph’s advances. He’s persistent, almost to the point of desperation, and definitely not politically correct. The two finally strike up a conversation and begin a friendship that blossoms into the early stages of romance.

There aren’t many twists in the well-crafted but predictable script, it’s the characters and the way they navigate once dormant feelings that give the show its warmth. One of the pleasant surprises is the lack of tragedy in the script, but that’s not to say there’s no conflict. Director Alan Knoll has assembled a fine cast that fully commits to the joy and hesitation inherent in the story and the show reveals itself in ways that feel realistic and authentic.

Joplin keeps Ralph from becoming annoying or overtly patronizing, finding ways to add levels and interest to a character that could easily become one-dimensional. His Ralph is filled with joie de vivre even in moments of introspection, ensuring that he’s imminently likable and enabling us to “let it slide” when he spouts old-school chauvinism. Though she gives it a real effort, even Carol can’t avoid getting caught up in his enthusiasm.

Sturdevant plays the memory of Ralph’s younger self with a believably plausible physical resemblance that’s aided by well-practiced gestures and ticks that mimic Joplin’s. His arias create the transition between scenes and, while I am not familiar enough with the included pieces to know for certain, each song seemed connected to the story through expression, intonation, and focus. In addition to thoroughly engaging performances by Joplin and Sturdevant, Tommy Nolan and Maggie Ryan turn in solid work.

Nolan is mysterious and feisty as love interest Carol, immediately piquing Ralph’s interest by ignoring his advances. There’s a suggestion of sorrow to her character, and Nolan peels each layer away slowly, waiting until the last possible moment to reveal the source of her turmoil. It would be easy to dismiss Carol, and we can see her truth coming for quite some time before she finally opens up to Ralph, but Nolan ensures that we care about her. Ryan is affectionately overprotective and meddlesome as Ralph’s sister Rose, with a pugnacious attitude and worrisome nature that only lightens up when she talks about cooking. Rose’s character is the least developed in the script, but Ryan ensures this isn’t a throwaway role. During the closing scene, she and Joplin are touchingly honest in a way only siblings can be, wrapping the show with genuine care and affection.

The technical elements serve the show well and scenic designer Landon Shaw makes the most of the intimate space, creating the sense of a lively dog park and providing unobtrusive platforms for scenes in other locations. Costumer Teresa Doggett subtly but effectively points out differences in the characters, suggesting that Carol is significantly more affluent that Ralph and Rose, though I wish Rose wasn’t quite so stereotypically dowdy. Lighting designer Geordy Van Es, sound designer Robin Weatherall, and accompanist Nancy Mayo add the final details in a well-produced effort.

Director Knoll and his cast give audiences a peek into the lives of healthy, active seniors who appear reasonably well adjusted and, frankly, normal, which seems exactly the impression DiPietro wanted to create. Though the dramatic tension and conflict are minimal, the story contains enough detail and action to keep us interested. Like an afternoon at the park, “The Last Romance,” in performance at Insight Theatre Company through March 18, is a nice way to spend a few carefree hours.