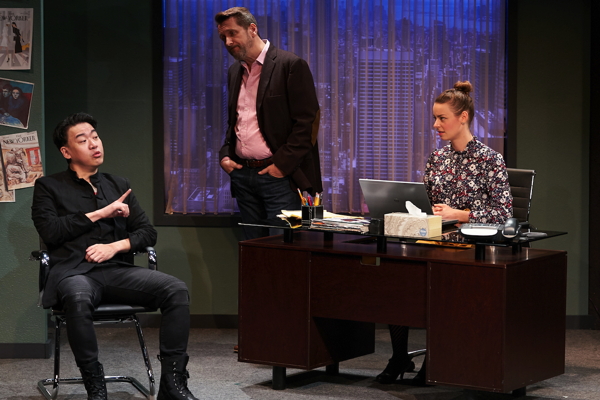 In the Repertory Theatre's 'Caught', everything you know is wrong

"Everything You Know is Wrong" is both a hilariously surreal 1974 album by the The Firesign Theatre and a decent summary of "Caught," Christopher Chen's ingenious puzzle box of a play at the Repertory Theatre of St. Louis studio theatre through March 25th. It's almost too clever for its own good, but it does raise issues about the contextual nature of Truth in a thought-provoking and entertaining way that doesn't break the fourth wall so much as ignore it.

Providing too much information about "Caught" would ruin its many surprises, but I can at least give you the setup. As you enter the studio theatre you're given a program. But it's not for a play titled "Caught," it's for the conceptual art exhibition "Devil in a Red Dress" by Lin Bo of the Xiong Collective. Rep volunteers helpfully answer questions about the art on display, including the titular video piece projected on the center panels on stage. Then the lights dim and Lin Bo (actor Kenneth Lee) is introduced by director Seth Gordon (director Seth Gordon).

Lin Bo presents a slide show describing how China's autocratic leadership has co-opted protest art by displaying its own fake protest art in Peking's 798 Art District (a real place, although its history is more complex than Lin Bo would have us believe) and then details his harrowing experiences as a political prisoner, as recently described in a New Yorker article. He finishes his presentation, the lights dim again, and the panels behind him are drawn aside to reveal an office at The New Yorker where Lin Bo is being quizzed by the article's author, Joyce (Rachel Fenton) and her aggressively clueless editor Bob (Jeffrey Cummings). It seems that an independent investigation has turned up some holes in the artist's story.

And so it goes for a total of four scenes, each of which reverses and undermines what has gone before, mixing the real with the fictional and constantly changing the audience's expectations. It also challenges ideas of what and how we understand the nature of truth, most notably in a circumlocutory and increasingly bizarre interview with playwright Wang Min (Rachel Lin) that reduces her interviewer to tears.

And that brings me back to that four-man audio theatre group (now reduced to two due to mortality), The Firesign Theatre, because "Caught" parodies and defies the audience's expectations about theatre the way classic Firesign Theatre albums parodied and defied the audience's expectations about TV and radio. In "Don't Crush That Dwarf, Hand Me the Pliers," for example, we're first presented with a service by Pastor Rod Flash of the First Church of the Presumptuous Assumption of the Blinding Light. Then the perspective changes and we're hearing the service in the background as George Leroy Tirebiter is watching it on TV. But then George orders a pizza and is sucked into the TV, where he becomes an aged version of himself on a TV talk show reminiscing about his old movies. Then someone changes the channel and we're hearing/watching one of those movies, "High School Madness." Eventually we learn that the person changing the channels is old George, who has been up all night watching himself on TV.

"Caught" isn't as deliberately surreal as the FT's work, but the repeated changes in perspective have the same dizzying effect, like a roller-coaster ride through a hall of mirrors. I think it fails to provide a coherent point of view on the issues it raises or to offer any real resolution, but maybe that's the point--the play may be over, but the story continues.

It is, in any case, superbly acted. Mr. Lee manages to make Lin Bo just phony enough to make his subsequent unraveling credible, but not so obviously bogus as to give away the game too early. Ms. Fenton's portrayals of both the flustered Joyce and the exhibit curator are finely shaded.

The backstage and technical aspects of the production are impeccable, as they so often are at the Rep. Mr. Gordon's direction follows the script's subtle changes in tone expertly. Robert Mark Morgan's simple but effective sets and Rusty Wandall's minimal but evocative sound add to the overall impact of the production.

"Caught" is, in short, a kind of theatrical thrill ride that dazzles, entertains, and provokes. Go and enjoy, but give yourself some time to discuss it afterwards with your friends. Odds are everyone will have different perspectives on what they have seen. Because, after all, everything you know is wrong.

Performances of "Caught" continue through March 25th downstairs in the studio theatre of the Loretto-Hilton Center on the Webster University campus.