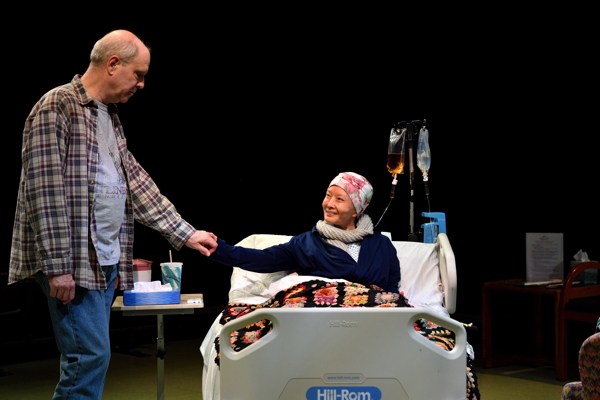 Humana Festival 2018: No prizes in this family feud in 'God Said This'

The prolonged illness and death of a parent can put stress on the most durable of families. When the family is as fragile as the one Leah Nanako Winkler depicts in "God Said This," which is getting its world premiere at the Humana Festival of New American Plays through April 8th, the results can be devastating.

"God Said This" is centered on the Lexington, KY, hospital room where Masako (Ako) is undergoing chemotherapy for an especially aggressive form of cancer. Her daughter Hiro (Satomi Blair) has returned from New York to offer support, even though she has never forgiven her alcoholic father James (Jay Patterson) for the abuse he inflicted on the family before he got sober and even though she finds the born-again Christianity of sister Sophie (Emma Kikue) baffling. Hiro tries to reconnect with her old classmate John (Tom Coiner), a single dad with issues of his own, with mixed results.

There is much to admire in "God Said This," beginning with the credible and often moving scenes between Masako and James. The parents are the most fully developed characters in the script and are exceptionally well acted by Ms. Ako and Mr. Patterson, both of whom completely inhabit their characters. The comic relief scenes between Hiro and John are hilarious (although there are probably too many of them), and John's ruminations on the challenges of parenting offer an ingenious way for the playwright to shed light on James's failures in that area.

But there are issues. The daughters are both fairly one-dimensional and frankly unappealing characters, and their dialogue feels more trite than that of the parents. The scenes between John and Hiro in John's car get repetitious after a while. And the playwright relies far too heavily on the monologues James delivers to his fellow AA members (played by the audience) to advance the story.

Those monologues are an issue for another reason: they present the entire story from the point of view of the sober James, allowing him to essentially whitewash the years of abuse the drunk James heaped on the family. We see a bit of that in a powerful scene in which Masako rails at James for creating the stress that, in her mind, brought on her illness. "You gave me cancer," she screams at one point. But then the scene dissolves in hugs and we move on.

"God Said This" raises worthwhile concerns, not the least of which is the way Americans do (or don't) deal with mortality. But it does so unevenly and could probably stand some editing. There's not quite enough material here to cover its two acts and some story elements felt a bit like padding.

In any case, Morgan Gould's direction makes smart use of the Bingham Theater's in-the-round space and the cast generally turn in strong performances. The technical aspects are impeccable, as they generally are at Actors Theatre, with a special shout-out due to M.L. Dogg's clever sound design.

The 2018 Humana Festival of New American Plays runs through April 8th at the Actors Theatre of Louisville in downtown Louisville, KY.