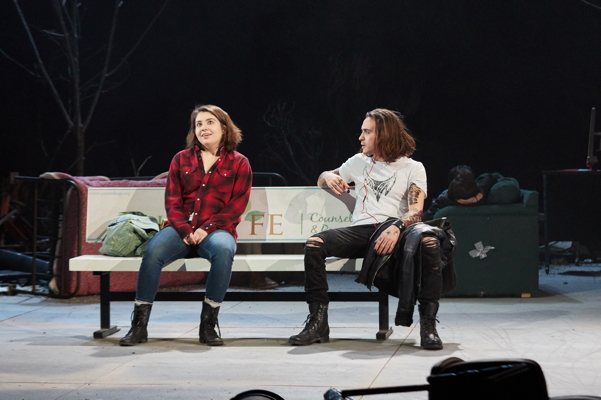 Humana Festival 2018: The banality (and tedium) of evil in 'Evocation to Visible Appearance'

In her essay of Mark Schultz's "Evocation to Visible Appearance," which is getting its world premiere at the Humana Festival of New American Plays through April 8th, Amy Wegner quotes the author as saying that his notion of the Devil is "an absence, a void--not in the sense of something that's beyond our comprehension, but just nothingness." His intent in the play, he says, was to present that Devil onstage.

I'd say he succeeded. "Evocation to Visible Appearance" is, in fact, just under two hours of ennui-inducing nothingness. The plot, such as it is, revolves around 17-year-old Samantha (Suzy Weller). She may (or may not) be pregnant by boyfriend Trevor (Lincoln Clauss) but in any case the future looks bleak. Her father Russell (Bruce McKenzie), who appears to be dying, spends all this time asleep on the couch and Martin (Daniel Arthur Johnson), her boss at Bear Burger, has little to offer outside of motivational bromides. Wannabe "black metal" guitarist Hudson (Luke F. LaMontagne) seems to share her angst but her institutionalized sister Natalie (Ronete Levenson) just can't be bothered.

The characters are little more than gestures, and there is no actual dialog between them in any case. They talk around, over, and through each other but never interact. The show is effectively a collection of lengthy and repetitious monologues punctuated, toward the end, by a brief bit of pointless violence and capped by the most boring heavy metal song imaginable.

Evil, in short, was never this banal.

The plodding direction by Actors Theatre Artistic Director Les Waters gives the audience plenty of time to examine the play's many weaknesses, although even with better pacing this would be a slog. The members of the cast do credible work with their thankless parts, with perhaps the best performance coming from Mr. McKenzie as the heartbreakingly broken Russell, but ultimately there's just no reason for the script to exist.