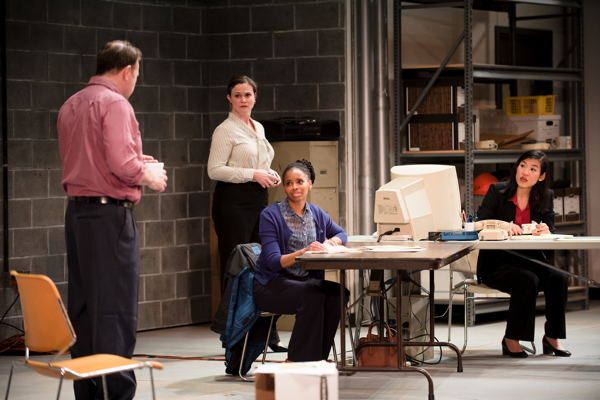 The importance of sheer dumb luck in human affairs is something that was well understood in the ancient world. These days we seem determined to deny it, no matter how often it dope slaps us.

The characters in Deborah Stein's compelling "Marginal Loss," the world premiere of which is part of the 2018 Humana Festival at Actors Theatre of Louisville, have been slapped rather hard. Through sheer accident, they have escaped being victims of the attacks on September 11, 2001, and now are trying to rebuild their brokerage business from the ashes.

As the play opens, John (Ted Koch) and Allegra (Nancy Sun) are reporting to work in a spartan New Jersey warehouse just 48 hours after the attack. Together with Margaret (Carla Duren), a freshly minted college graduate hired as a temp, they struggle with the dual challenges of recovering from their firm's financial losses and their own personal losses as they realize how many of their coworkers are among the missing. Cathy (Jessica Wortham), their de facto leader, tries to take charge, but she, too, is dealing with a serious case of survivor guilt.

Inspired by the playwright's own experiences as a temp in the days after 9/11, "Marginal Loss" tells a fast-paced and generally very intriguing tale of people coping with the unimaginable by immersing themselves in the mundane. The need to reconstruct a client list from old files and find a way to engage in stock and bond trades with nothing more than boxes of paper files and a singe computer on a dial-up modem (remember those?) allows them to avoid grief.

But they can't avoid it entirely. In one brief scene, for example, Allegra sits with a boom box listening to a recording of a call made by a coworker in the last seconds of his life. She's wearing headphones, so we can't hear it, but the grief on her face tells us all we need to know.

Even so, Ms. Stein's characters do such a good job of burying their emotions in the herculean task of business recovery that the emotional stakes in the script are ultimately far too low, and the underlying issues tend to get swamped in the minutiae of investment banking. The big emotional revelation, involving a white lie told by Margaret early on, felt like pretty small beer.

Meredith McDonough's direction is crisp and focused, and her actors do excellent work. You can see the emotional turmoil just below the surface as they struggle to keep their business afloat. The text calls for finely shaded acting, and they deliver it.

"Marginal Loss" may not be great theater, but it's an interesting story that presents an unconventional take on a bit of recent American history that I thought had been done to death. I'm glad to see I was wrong.